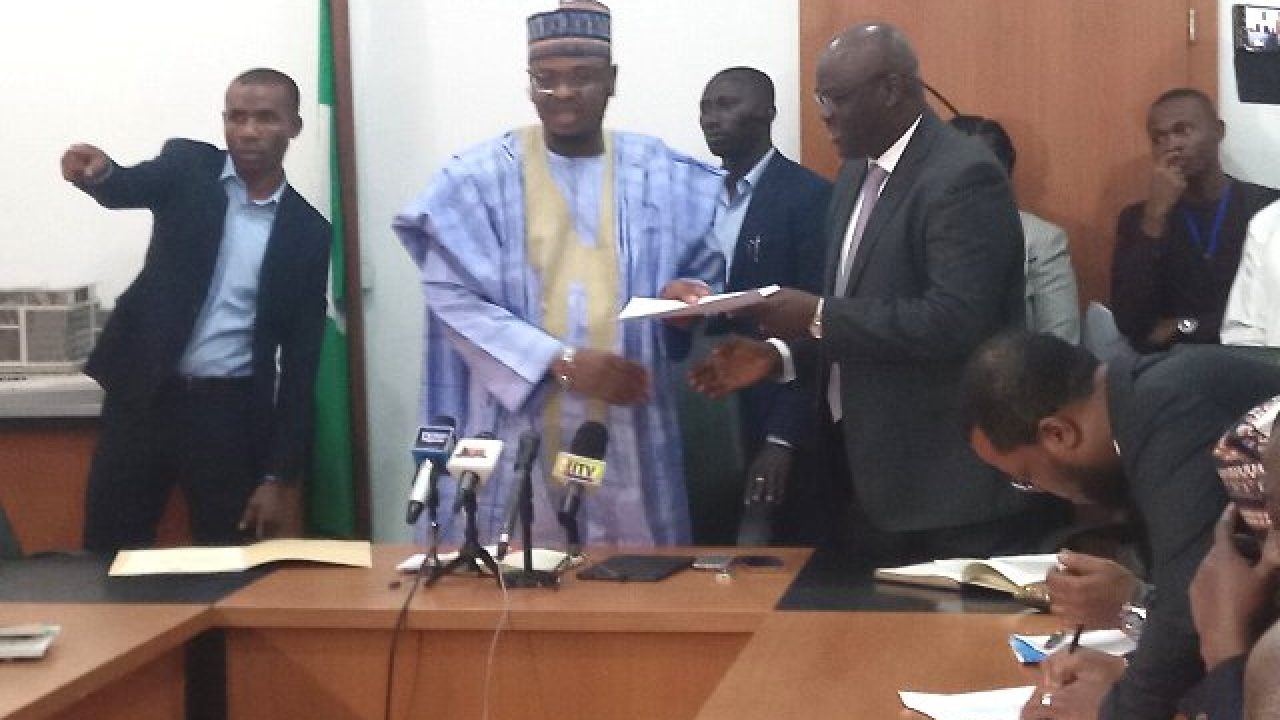 The Honourable Minister of Communications and Digital Economy, Prof. Isa Ali Ibrahim Pantami, has formally inaugurated Prof. Mansur Bindawa, as a non-executive commissioner on the Board of the Nigerian Communications Commission (NCC) by administering the oath of office on the new appointee.

Speaking at the official induction of Bindawa into the NCC Board, Pantami said Bindawa’s journey into the Commission followed the laid-down laws establishing the Commission.

“The inauguration of Prof. Bindawa into the NCC board is in fulfilment of the requirements of Nigerian Communication Act (NCA), 2003, which stipulates that the Board of Commissioners of NCC shall constitute of three executive commissioners and six non-executives commissioners, selected based on proven integrity and diversity in their expertise in different professional spheres,” he said.

At the occasion, which took place in the Minister’s Office at the NCC’s Communications and Digital Economy Complex in Abuja on Monday, March 28, 2022, Pantami congratulated Bindawa and described his appointment as fitting. The Minister also challenged Bindawa to cooperate with other Board members of the Commission for effective regulatory operations that will benefit the Commission’s staff, stakeholders and the Nigerian economy at large.

Overall, the Minister also tasked the entire Board and management of the Commission on the need to re-double their efforts and journey with the Ministry and its various agencies to collectively implement various policies of government aimed at developing the telecommunications sector of the Nigerian economy.

In his remarks, Chairman, Governing Board of NCC, Prof. Adeolu Akande, who led Bindawa and other Board members of the Commission to the Minister, expressed appreciation to the Federal Government and the Minister for “fortifying the Commission with intellectuals ready to work together for the advancement of the technological ecosystem.”

Akande stated excitedly, that, “Bindawa is the fourth professor on the board of the NCC and his professional experience and expertise will further strengthen the Board.”

Additionally, Akande asserted that Bindawa’s appointment conforms to the notion that people of diverse experience continue to complement one another in taking the Commission to greater heights.

Speaking in the same vein, NCC’s Executive Vice Chairman and Chief Executive Officer, Prof. Umar Danbatta, thanked the Minister for his interest in policy implementation and for preserving the autonomy of the Board and Management to discharge their functions effectively as a regulatory institution.

Danbatta assured the new board member of a work atmosphere characterised by cordiality and friendship where regulatory issues of national interest are resolved through intellectually-engaging deliberations for the progress of the Commission and the nation.

Bindawa, responding after taking oath of office, appreciated the government for the opportunity given to him to serve the nation through the NCC and pledged to deliver on the set mandates of the Commission, promising to cooperate with the Board and Management.

Bindawa’s inauguration by the Minister followed his nomination in a letter dated January 10, 2022 by President Muhammadu Buhari, GCFR and subsequent confirmation of the nomination by the Senate of the Federal Republic of Nigeria on March 1, 2022, in line with the provisions of the Nigerian Communications Act (NCA) 2003.