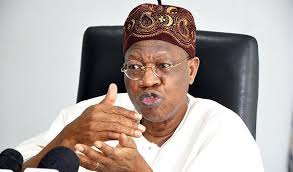 The federal government says it has ‘credible evidence” to back up its outcry that the opposition is planning to ‘sabotage Muhammadu Buhari’s Administration, generally overheat the polity, and make the country ungovernable.’

The Minister of Information and Culture, Lai Mohammed, said this on Saturday at the 2019 edition of his Annual Ramadan Lecture held at his home town Oro, Kwara.

“As you are aware, a few days ago we raised the alarm that either by themselves or via their proxies, the PDP and its presidential candidate are doing everything possible to sabotage the Buhari Administration.

“Our interventions are based on credible evidence, and no government, with the kind of evidence that we have, of plans to subvert the power of the state, attack the nation’s economic live wire and generally unleash mayhem on the polity, will keep quiet.

“The security agencies are all alert to their responsibilities and will not sit by and allow anyone to reverse the gains of our democracy under any guise,” he said.

Mr Mohammed’s claims came weeks after the Nigerian Army raised an alarm that “unpatriotic elements” are colluding with foreign collaborators to derail the swearing-in of the newly elected government on May 29.

Similar rhetoric from senior administration officials of the Buhari government about purported opposition plots to seize power with extralegal tactics could have a serious implication for the country’s already fragile stability, security experts told PREMIUM TIMES this week.

Mr Mohammed noted that similar alarms had been raised by the police, the military, and the DSS.

He said the government will neither be distracted nor dissuaded by pseudo and partisan analysts that had teamed up with the opposition to “either exhibit their ignorance or to engage in red herring and name calling”.

He called on Nigerians to use the occasion of the Ramadan to pray for the peace unity and stability in the country.

“I make this request against the background of those who are daily plotting to exploit our national fault lines of religion and ethnicity.
“Those who masquerade as democrats but can’t take electoral defeat, those who will not hesitate to collude with anti-democratic forces and dead-enders to fan the embers of violence in the country.
“Those who have elevated their personal ambition over and above our survival as a nation,” he said.
The minister thanked all Nigerians for their support and prayers for the administration. He urged them not to relent, especially in the run-up to the May 29 inauguration of the president.
The  12th edition annual Ramadan lecture was attended by Abubakar Bagudu, governor of Kebbi, Minister of Communication, Adebayo Shittu, political stalwarts, traditional rulers, clergymen, Muslims, and Christians.
Share this on WhatsApp