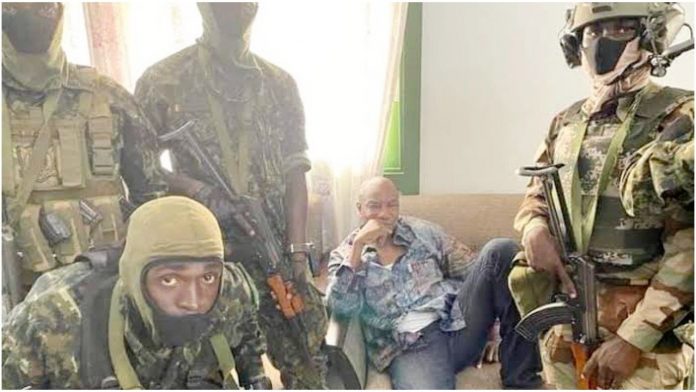 Share this on WhatsApp
Spread the love
The Nigeria Mission in Johannesburg, South Africa, and Nigerian Union of Traders Associations in Ghana (NUTAG), have condemned Sunday’s military coup in the Republic of Guinea Conakry.
Mr Abdulmalik Ahmed, the Consul-General of Nigeria to South Africa, and Mr Chukwuemeka Nnaji, the President of NUTAG, made their positions known through separate telephone interviews with the News Agency of Nigeria (NAN) on Sunday night.
They spoke against the backdrop of the coup in Guinea, resulting in the detentiin of President Alpha Conde by the soldiers, dissolution of government and the suspension of the constitution in the West African nation.
The coup was said to have been led by Col. Mamady Doumbouya, the Head of Guinean Special Forces.
Ahmed said: “It is a sad day for the people of Guinea and a setback for democracy in West Africa and Africa in general.
“Democracy in itself should not be viewed as an end in itself, but a means towards development and popular participation in governance and decision making.
“It is a setback for our subregion.”
In the same vein, Nnaji described the coup as unacceptable and appealed to the African Union and ECOWAS to intervene in the matter to restore sustainable democracy, not just in Guinea, but in the continent.
According to him: “Coup in any country of Africa is unacceptable and therefore should be condemned with a very strong force.
“So, I add my voice to call on the International Community to intervene in the matter, as soon as possible, to stop more casualties in Guinea.
“We do not want a repeat of Liberia, Sierra Leone or the Ivory Coast once again in West Africa.
“I call on the leadership of ECOWAS, especially Nana Akoufo Addo, the Chairman of ECOWAS Heads of State to intervene immediately.”
The African Uniion ( AU), the Eonomic Communiyy of West African States (ECOWAS) and the International Community had since condemned the coup in Guinea.
Share this on WhatsApp