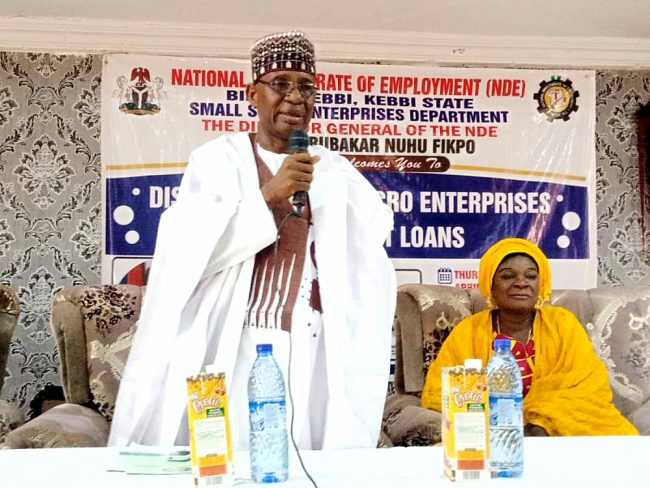 The Director-General of the NDE, Malam Abubakar Nuhu-Fikpo, made this known during the disbursement of the loans in Birnin Kebbi on Friday.

Nuhu-Fikpo, represented by the state Coordinator of the NDE, Alhaji Abdullahi Danjuma-Machika, said each of the benefiting youths received N20, 000 each to enable them to improve and expand their businesses.

According to him, the beneficiaries were drawn from the three Senatorial Districts of the state.

Nuhu-Fikpo said the various bank accounts of all the beneficiaries had been credited to enable them to set up their micro-businesses.

“From experience, the NDE believes that N20,000 can make a turn-around if seriously utilised in the establishment of micro ventures.

”The Micro Enterprises Enhancement Loan Scheme is a scheme under the Small Scale Enterprises Department of the Directorate.

“It is an integral part of the Small Scale Enterprises of NDE, which has been anchoring this scheme over the years,” he said.

According to him, a greater number of unemployed youths have been empowered through the scheme.

“It is expected that this loan is paid back to enable others benefit; it is a revolving loan which captures a lot of budding entrepreneurs.

“NDE is still pursuing vigorously its onerous task of creating and generating jobs for unemployed Nigerians,” he said.

Nuhu-Fikpo urged the beneficiaries to make good use of the loan to become self-reliant.

A cross-section of the beneficiaries commended the federal government for the empowerment initiative and pledged to judiciously utilise the money.