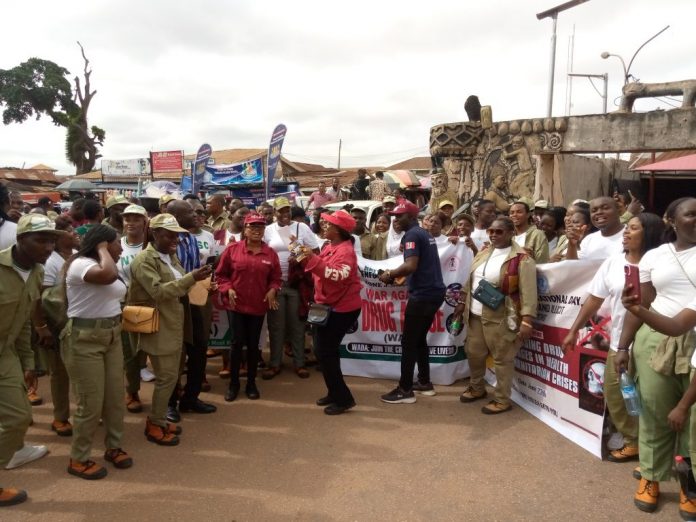 National Drug Law Enforcement Agency (NDLEA), Ondo Command, on Monday, said it had rehabilitated 60 drug addicts and jailed 65 others from June 2021 till date.

NDLEA Commander in the state, Mr Kayode Raji, disclosed this during a sensitisation and road walk, organised to commemorate this year’s International Day Against Drug Abuse and Illicit Drugs Trafficking.

According to him, June 26 is a day set aside by United Nations to raise awareness on drug abuse and its menace.

Raji said that over 30,000 kg of illicit drugs were also seized within the same period.

He added that the command had also arrested those who saw themselves as ‘untouchable’ in the society.

The NDLEA commander, however, expressed happiness with those whom the agency were able to rehabilitate and reintegrate into the society.

He said that marijuana, puff Shisha, alcoholic drinks and other deadly mixtures, such as “scoochies or skushis” topped the list of the most consumed substances among the youth in the state.

Raji also identified other deadly drugs and substances being abused by the youth as: Rohypnol (popularly called “gegemu”), Arizona and Loud, believed to be an enhanced Marijuana that produces stronger effect than the regular one.

“We have seized over 30,000 kg of various hard drugs, while 294 suspects had been arrested, out of whom about 65 had been sentenced to various jail terms.

“We have arrested some people who had, hitherto, felt that they were untouchable and we are still doing more. As a matter of fact, it is gratifying to state that our greatest achievement is those that we’ve taken off drugs.

“Some have been reintegrated to the society while many others have gotten jobs. About three weeks ago, one of those we’ve rehabilitated came to testify that he just secured a job in Dubai. This shows that we can do it.

“We have synergised with higher institutions across the state; we’ve also gone to various schools for sensitisation through persuasion, while War Against Drug Abuse (WADA) clubs have also been established in schools,” Raji said.

The NDLEA commander said that the agency’s message was “Stay away from drugs”, adding that various lectures had been organised across the 18 local government areas of the state on the effects of drugs.

“It doesn’t do any good to the body; it affects the body system, the economy, security architecture, health and the family setting.

“Drug is evil; it portends evil; it does nobody any good. We are urging everybody to stay away from drugs. There is no small or big drug,” Raji said.

Also speaking, the Zonal Commander in charge of Ondo and Ekiti states, Mr Parah Bawa, called on drug users to desist from it before it was too late.