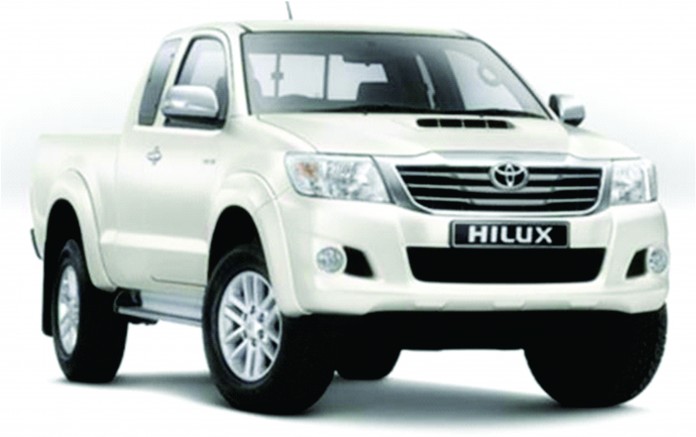 TOYOTA has introduced a new Hilux with an all-new level of sophistication that will give its rivals sleepless nights for the African market.

Built for the local and export markets at Toyota South Africa’s Durban plant, the new Hilux gets a contemporary new look with wraparound headlights. It possibly looks softer than before but it’s still tough as nails beneath.

With a ladder frame chassis that’s stronger and a body that’s more torsionally rigid than the outgoing version the new Hilux is tougher and more rugged, but at the same time it’s been made more refined with enhanced sound proofing and a modern new interior.

The keen off-road ability of the 4×4 versions has been retained but it’s easier to manage with shift-on-the-fly all-wheel drive engagement and a downhill assist control which allows steep descents to be tackled without having to touch the brakes.

The cabin’s grown to offer more head, shoulder and rear knee room while the load capacity has increased. Towing capacity has been increased across the range (except the entry level petrol model), with the 2.8 GD-6 4×4 models able to lug up to 3.5 tons. Trailer Sway Control (TSC) helps keep it all pointed in the right direction.

All versions come standard with ABS brakes, a driver airbag and electric windows, and the gizmos available on upper-spec models include active traction control, climate control, up to seven airbags, cruise control, daytime running lights and a reverse camera among others. The range-topping 4-litre petrol version also offers satellite navigation.

The petrol engines remain as before with a choice of 2.0 (100kW/182Nm), 2.7 (122kW/245Nm) and 4-litre (175kW/376Nm) units but there’s a new duo of modern GD (Global Diesel) engines with greatly improved outputs and 9% better economy, both utilising Variable Nozzle Turbocharger (VNT) technology and intercoolers.

Workhorse models are equipped with a 5-speed manual transmission with higher grade models receiving an option of either a 6-speed manual or 6-speed automatic transmission. A first for Hilux is a Drive Mode switch offering Eco and Power modes that adapt the throttle response.