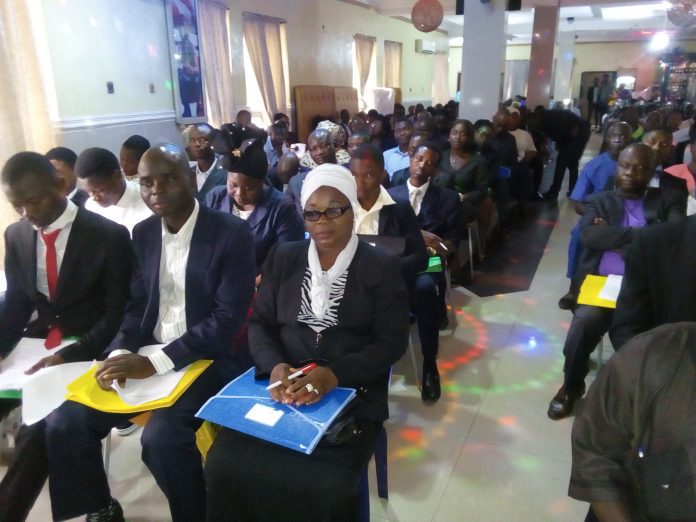 Share this on WhatsApp
Spread the love
By Lanre Adesanya

Resolved to emancipate 30million Nigerians from the shackles of poverty, the Amazing Care  Foundation, a Non Governmental Organisation is poised to attract foreign grant to better the lot of indigents, through Social Exchange Market funding of Model Microfinance Bank.

The National Coordinator of ACF Mrs. Apollonia Eke made this disclosure, while chatting with newsmen at a training exercise organized by the NGO in Lagos for the MMFB would be directors.
Mrs. Eke, while giving the expected prerequisites for access to the envisaged grant, hinted that the grant could only be accessed by a registered member of an NGO, which would be able to access the funds from affiliated MMFB.
She stated further that the organization’s main focus are the women,  children, youths and the general public.
The ACF National Coordinator also said that the vision was basically birthed by Social Exchange Market to end or eradicate poverty  and stop corruption,having successfully used China as a pilot scheme and being the brain behind her reformation.
Eke noted that,”Social Exchange Market is a market where brain and project is bought, you think out a project,you present it to them, they would then buy it if convincing enough,they would now give you money to execute it.
“The distinguishing features of our Model Microfinance Bank is that it deals with Grant not loan.
“They came in 2015 and since they have been trying to convince Nigerians, but because of the fraudulent activities common here, many never believed.
” The initiative was the brain child of Pastor Donald Olorunkemi Kayode who was the consultant who wrote a proposal and presented to the social exchange market in United Kingdom to empower 30million Nigerians.
“He choose the NGOs to get to the grassroots as there reach is wide spread beyond government’s, so they are arranged in clusters of 1000 minimum and 10,000 maximum individuals in a unit under a Model Microfinance Bank for ease of disbursement.
By projection, in each of the 774 constitutionally recognized local government areas in Nigeria ACF intend establishing 13 Model Microfinance Banks to aid seamless disbursement of the fund, a total of 10billion naira in each.
She added that the grant is designed to holistically deal with the root of poverty, as 5 percent of the whole amount which is the initially payable to the registered member having scaled the interview hurdle is meant for taking care of  their personal effect.
After which the project grant would be released,to forestall likely diversion of purpose due to lack.
The Lagos State Coordinator Pastor  Bilesanmi however, noted that the concept is different and genuine in that, ” you are not expected to contribute money before you can access the grant.
“Only get your NGO registration form and fill, you immediately qualify for the grant, if we can do accordingly in our NGO, we can have 50 percent poverty alleviated”. He said.
In her own view, the Ogun State coordinator of ACF Mrs Kemi Olayiwola noted that, “we already have 13-15 MMFB each of which would have 12-15 staff piloting the concept in Ogun in a bottom-up approach, as it is a fact that people live below a dollar per day.
“Farmers, Small Medium Scale entrepreneur within the age bracket of 17-70 years old who are still confirmed vibrant would be able to access this grant stage by stage to execute maximally their projects.
“It is a three years programme before the second phase comes,at the moment we have reached Ijebu -Ode, Owode-Yewa, Egbado, Obafemi Owoseni, Ijebu North East.
The Programme Director Mr.  Adeseun Adebayo in his own contribution noted that the training is needful, owing to the fact that the would be Directors need possess required competence in managing and monitoring the use of the fund when released.
The South West Coordinator Pastor Jeremiah Ifekoya noted that in the next two years, going by their reach the whole nation would have been touched.
Share this on WhatsApp