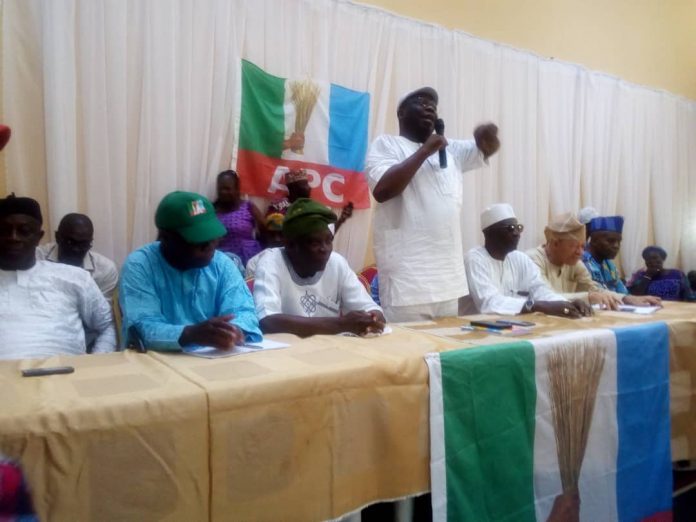 Share this on WhatsApp
By Lanre Adesanya
The factional Chairman of the Lagos State All Progressive Congress Hon. Fouad Oki has declared that it is time to restore Lagos back to the original owners, citing the expiration of the era of impunity and illegality.
Oki made this assertion while speaking at the first constituency meeting of his faction in Alimosho, he unequivocally condemned the deliberate attempt to unconstitutionally pocket the APC in the state, by a number of party opportunist who felt threatened by his stance to change the ugly trend.
The thoroughbred lagosian raised three posers which according to Oki, the other faction must afford credible answers to. What did the constitution say about internal democracy? What is stated in the electoral act as amended on party congresses? What does the guideline say about jurisdiction?
“Don’t join issues with them when they abuse me, but tell them to address the issues on ground, the impunity and illegality must stop, we taught them politics, I have been campaign manager for four times now, it is no joke quite unprecedented.
“Councillors from INEC recognized wards can participate, if such hold sway 245 wards will be the result, but all dubious characters can’t do it right, that informs why I said they don’t want Ambode to be Governor, this bunch of quacks can produce nothing credible.
I have countered illegalities before and would continually do,I once confronted Ajomale when after six month he noted there won’t be need for exco meetings six months after saying we have met the standards, I deferred and told him if we called for meeting and he refused to attend we shall remove him.
I remain steadfast and will never stand against truth, fairness, equity and justice, these reasons made me had issues with many people as after AD we met ourselves in three sole proprietor owned parties;AC,ACN,APC where the owner dictates the tune, we shall return the party back to the people they will finance it.
“No harmonization, no retreat no surrender, we shall not seat with them to share anything, darkness will not prevail over the light, we are in court for the interpretation of laws and guidelines.
“I urge Alimosho whenever the candidates shows interest don’t give preferential treatment, there would be no longer be any room for consensus candidates again, we will go out and vote and accept the people’s will, that they are not ready to do,we are victorious already because we have the numbers.
“We would hold our ground strong, internal democracy has come to stay, never again would we allow godfatherism or imposition; we are respecter of the law and would stick by it.
He noted that members should brace up for new registration as the initial registration branded by the other faction has crashed and not reckoned at the national, that one is not authentic.
“Immediately after Ramadan membership registration would commence and in three weeks you will have your membership card, that would put paid to slip issue.”Oki said.
Also speaking at the meeting Alhaji Olu Bakare the State Vice Chairman Lagos West, who affirmed the poise of the party to do away with irregularities and illegality, noted that the party would no longer tolerate imposition.
“Here in Alimosho we are the pacesetter for good governance from the time when I was state Chairman for SDP, the like of Tunde Balogun were my foot soldiers, all we are out to state is that APC is one, but we are up against impunity.
“We shall not give in to consensus again since they have chose not to do the right thing, we shall ensure constitutionality and compliance with electoral procedures in Lagos State.
Hon. Wale Okedara a state ex-officio who also harped on the need to ensure total shift from what used to be the norm, where someone just arrogate to much influence not considering the need for even distribution of wealth to make the society develop.
According Okedara the faction of the  party would stand for what is right at all times not minding whose ox is gored, as the impunity has cost us a lot.
Over 2000 party faithfuls were in attendance let alone those who could not gain access into the venue due to the crowd.
Share this on WhatsApp