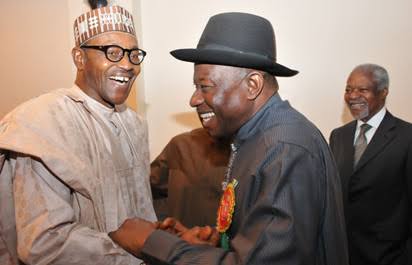 President Muhammadu Buhari has joined the PDP and other well-wishers to celebrate former President Goodluck
Jonathan on his 60th birthday on Monday.
In a congratulatory message the Special Adviser to the President on Media and Publicity, Femi Adesina relayed in a statement in Abuja on Sunday, Buhari noted Jonathan’s meteoric rise– from being a deputy governor, governor, vice president to becoming Nigeria’s president for six years.
Such rise from a humble riverine background, he said, testifies to the greatness and inclusiveness of Nigeria’s democracy, and serves as an invitation to all those with interest to add value to the nation.
Many Nigerians like to use the words luckiest politician to deceribe  the former education inspector, lecturer who became am LGA, and rose from there to governor, vice president, and president for six years, hoping to make it 10 in a second term bid which he lost to Buhari in 2015.
The president prayed that the almighty God would bless the former president with good health, wisdom and strength to continue serving the country.
The ruling APC in a statement has also congratulated the former president on his 60th birthday, saying his life and politics had been defined by patriotism and humility.
It recalled that the commendable and exemplary conduct of Jonathan before and after the 2015 presidential election demonstrated his patriotism and love for Nigeria.
The party urged Jonathan to remain steadfast in the positive ideals he stands for and continue to support the development of the country.
PV: 0