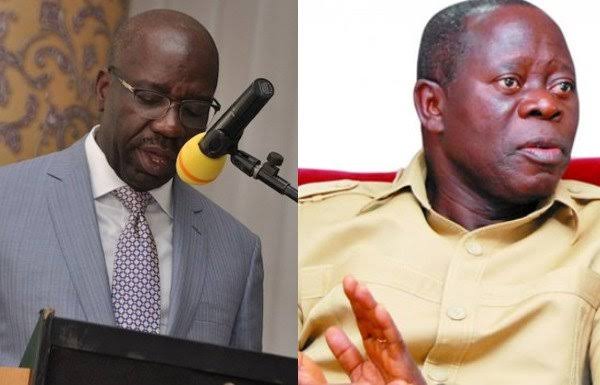 Governor Fodwin Obaseki of Edo State at the weekend subtly reported the embattled national chairman of the All Progressives Congress (APC) to President Muhammadu Buhari, complaining of the chairman’s lawlessness and the need to call him to order.

Apparently, the Edo State Government in a statement on Friday  by Crusoe Osagie, Special Adviser on Media and Communication Strategy to the Governor,  admonished that Oshiomhole should be made to  know that no one can be above the law of the land, urging the Presidency and the Inspector General of Police to call the APC National Chairman to order.

The state government noted that Oshiomhole’s ambition to be ‘ultimate godfather’ in Edo State is not worth the lives and safety of millions of Edo people. The government remarked that the desperation of Oshiomhole is scuttling the growth, sustainability and development democracy in Edo State.

The Edo State Government further cautioned that the lawlessness of any individual or group will not be tolerated in the state. The government, therefore, declared enforcement of stiff penalties on any individual or group that defies orders from security operatives, insisting that government unauthorized rallies under APC umbrella must not be held in any part of the state. The government warned against plans to organize rally in Edo Central Senatorial District.

The Edo Government declared: “It bears repeating that the Edo State Chapter of the APC has neither authorized nor organized any rally. “The plans of the dissident Edo Peoples Movement (EPM) to again disrupt the peace in the state in Edo Central Senatorial District is unauthorized and goes against the directives of the Nigerian Police Force and the state government.”

The Edo State Government, therefore, warned that there were similar gatherings in the past which resulted in civil disturbances, disruption of peace, injuries on innocent citizens and destruction of property, adding that the Edo State Government will no longer tolerate a repeat of such peace threat activities in the state.

The government appealed to citizens and residents of the state to remain law-abiding, go about their lawful businesses and shun any action that would undermine public peace and safety.