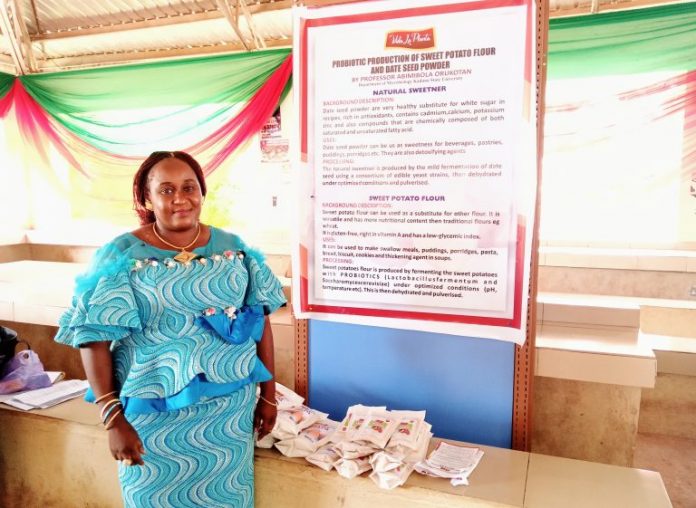 Prof. Abimbola Orukotan says “Date Seeds’’ and sweet potatoes are highly nutritious and can be used to tackle malnutrition among children and adults.

Orukotan of the Department of Microbiology, Kaduna State University (KASU), made this known at the unveiling of the processed products into powder form in Kaduna on Thursday,

Displaying the pro-biotic products at the maiden research exhibition organised by KASU, he said that the gesture was to promote research among academics and researchers at the university.

She said date seed powder was a good source of protein, with various vitamins and minerals, energy, and fibre for the nourishment of children and adults.

Besides its nutritional value, Date Seed was a healthy substitute for white sugar in recipes, rich in antioxidants, and contains cadmium, calcium, and potassium zinc.

She said it also had compounds that were chemically composed of both saturated and unsaturated fatty acids.

According to her, the Date Seed powder with detoxifying agents can be used as a natural sweetener for beverages, pastries, puddings, and porridges among others.

She explained that the natural sweetener was produced by the mild fermentation of Date Seed using a consortium of edible yeast strains, dehydrated and grinded into powder.

“The fermentation increased the seed’s Vitamin D complex as well as anti-ageing properties,” she added.

For the sweet potato flour, Orukotan said that the flour could be used as a substitute for other flour, adding that it had more nutritional content than the traditional wheat flour.

She said that sweet potato flour was gluten-free, low-glycemic index and a rich source of vitamins A and C, carbohydrates, and other nutrients.

“This will help in addressing malnutrition among children under five years.

“Instead of giving children pap, the sweet potato flour can be used to make swallow meals, puddings, porridges, pasta, bread, biscuits, and cookies for children.

“It is also rich in fibre which helps the digestive system and can also be used as a thickening agent in soups,” she said.

She explained that the flour was produced by fermenting the sweet potatoes with living microorganisms that have health benefits when consumed then dehydrated and grinded into flour.

The professor said that the drive behind the products was to go beyond professing things in theory to the practical for the benefits of industries and humanity.

The idea behind the products came during the COVID-19 lockdown when she decided to put into practice all the things she had been teaching students for more than 30 years.

“I decided to revisit my research works and transform some of the research findings to tangible products for the benefit of the people,” she said.

Earlier, Dr Aliyu Adamu, the Deputy Director, Directorate of Research and Development, KASU, said that the exhibition was to promote the spirit of research among academics to solve societal problems.

Adamu said that the exhibition provided an opportunity for researchers from the university, other academic, and research institutions to showcase their research findings and share experiences.

Prof. Muhammad Tanko, the Vice-Chancellor of the university, described research as a “critical” component of the roles of a university, which had been neglected over the years.

Tanko said that the exhibition was part of the university’s efforts to revive research among academics in the quest to provide solutions to societal problems.