By Femi Fani-Kayode
In 1994 almost one million Tutsis were murdered in cold blood in the space of one month by members of the ruling Hutu tribe in Kigali, Rwanda.
The genocide that took place in Rwanda at that time ranks as one if the most sordid chapters of African history and it must never be allowed to happen anywhere again on our continent.
Sadly we do not appear to have learnt the lessons of Kigali in our country probably because most Nigerians have no knowledge of history because it is not taught in our schools.
That single failing and lack of understanding and knowledge may well lead to our final undoing as a nation because the parallels and signs of what led to the butchery and tragedy that occurred in Rwanda are slowly unfolding here today. The dark clouds of blood are gathering but sadly most of our people cannot even see them.
They seem wholly incapable of discerning the season and the times. This is my greatest concern. Our people are behaving like turkeys that are celebrating the approach of Christmas and like rams that are rejoicing on the day before Sallah.
That in itself is a tragedy of monumental proportions and the implications and consequences of our collective indifference, amnesia and naivety are calamitous and far-reaching.
The title of this essay owes an intellectual debt of gratitude to my friend and brother Chief Dele Momodu who happens to be one of the most engaging writers and columnists in Nigeria today.
“Bobby Dee”, as Dele is better known to his numerous fans and close friends, was a strong supporter of the June 12 struggle and something of a protegee of the late and great Chief MKO Abiola, the winner of the June 12th presidential election in 1993.
He wrote an essay at that time and during the heady and dangerous days of NADECO and General Sani Abacha, in which he used this title. It was a brilliant essay and the title has stuck with me ever since because it really captured the moment.
I believe that we are back on the road to Kigali again in Nigeria and I pray that Dele will forgive me for using the same title, On The Road To Kigali, as he did approximately twenty years ago. Now to the point.
The number of Igbos slaughtered by Fulani militants in Enugu on 25th April 2016 has gone up to 100.
Many churches and homes have been burnt to the ground. When will President Muhammadu Buhari appreciate the fact that NON-FULANI LIVES MATTER? 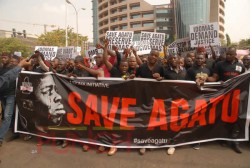 In reaction to this horrific situation, Mr. Babatunde O. Gbadamosi, a highly respected Lagos-based businessman, wrote the following on Facebook:
“Scores slaughtered by #FulaniTerrorists in Enugu, but the Fulani President, Muhammadu Buhari, his Fulani senior security commanders and government functionaries are more interested in pipeline vandals that are killing no one!
Nigerians, if you don’t arm yourselves and fight back, na una sabi.
Those of you Yoruba APC zombies that think you are special, when they finish with the MiddleBelt, the South South and the South East, you will be next, and there will be no one left to defend you.
I am referring to you, my Muslim uncles and aunties, who think the Fulanis will see you as kindred spirits and spare you. They will not.
Just as they are fake Muslims in the eyes of the Arabs, you are also fake Muslims in their eyes, only useful to help subjugate your people under their rule, then you will see pepper.
Kill Afonjaism now, and stand for something, or your children will one day curse the day you were born”.
Mr. Gbadamosi’s insight and understanding of the situation is second to none. His counsel is as priceless as it is timely. Let us hope that someone is listening.
In his own contribution to the debate on Facebook Mr. Lere Olayinka added the following:
“In this April alone, Buhari’s Fulani herdsmen killed almost 200 Nigerians, but Buhari’s headache is Niger Delta”.
On his part, Mr. Charles Ogbu, an obviously intelligent and gifted young man, wrote the following on his Facebook wall.
“The Fulani vampires are at it again. Today, Enugu, my state is their target. Dozens of people have been reportedly killed and hundreds displaced with buildings including a Catholic Church burnt.
This murderous group killed hundreds in #Agatu and occupied their land. The Fulani president did nothing. The Fulani headed DSS did nothing.
They went to Anioma in Delta state, abducted and killed their king. The Fulani president did nothing. The Fulani headed DSS did nothing.
They went to Awgu community in Enugu State, killed dozens and abducted dozens. The Fulani president did nothing. The Fulani headed DSS did nothing.
Only the police and the army did something this time: they arrested 78 indigenes of Awgu who are the victims and dumped them in prison and denied them bail on the allegation that they planned on attacking the Fulanis. Meanwhile, the perpetrators were allowed to roam free
It took a #hashtag campaign on social media for the #Awgu78 to be released.
Today, these vultures are back again, visiting death and destruction on defenseless Uzo-uwani people of Enugu State for no just cause.
The president will not say anything about this. The DSS will not say anything. The police will describe it as a mere misunderstanding between farmers and herdsmen. They will hardly confirm that anyone was killed neither will they arrest or prosecute any of those invading Fulani vultures.
The governor of Enugu State called Ifeanyi Ugwuanyi will neither say nor do anything about this.
The religious criminal called Father Mbaka… the one who swore that Buhari is the Lord’s anointed… will not talk.
Basically, the citizens are left with no choice than to defend themselves by any means necessary.
You either die fighting to defend your honour, your family, your land and your dignity as a human person or you die cowering in fear like some coward. Either way, you stand little chance.
Permit me to point out one fact here:
The Fulanis are not invincible (undefeatable) because they posses some kind of special fighting prowess. No! Not at all.
These Fulanis are invincible because they are enjoying govt support/cover/protection in their murderous activities. The impunity with which these guys operate is state-sponsored.
This is a fact, not just my opinion. Deep down, you know it. I know it.
President Buhari has a constitutional duty to protect the lives and properties of all Nigerians. He swore to do this. He is being paid to do this.
He has deliberately chosen not to do this. He has chosen to place the interest of his Fulani brethren above the lives of innocent Nigerians.
Buhari believes that his Fulani people are superior to other Nigerians. This is no different from the mindset displayed by Hitler which led to the world war. We know how it ended.
The silence of President Buhari over the murderous activities of his Fulani brethren is a moral tragedy! This is the height of man’s inhumanity to man!
Believe it or not, it will come to a time that Nigerians will rise up in their numbers and confront the Fulani beasts together with their sponsors.
There is a limit to what a man can take.
Let it be on record that Buhari is the one setting this country on the road once travelled by Rwandans in 1994″.
#GrazingBillMustDie
#SayNoToFulaniOccupation
On her own part, again on Facebook, Miss Santors Ugwuada Ezirigwe wrote,
“Before now, the Fulani herdsman were generally a group of cattle herding nomads plying their trade with every sense of innocence.
Then his dagger and sword was primarily for personal use and self-defense in the wilds.
However, this narrative has changed since the recent past especially since after the election of President Buhari in 2015. 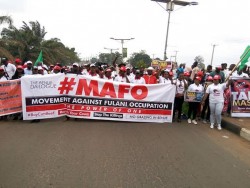