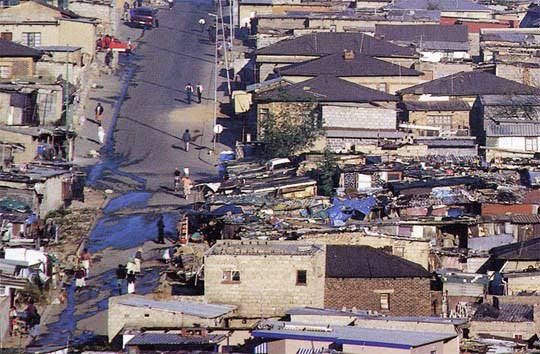 Stories from Makoko and other slums often make for awesome documentary contents aired by both local and foreign media. It’s not completely shocking that Nigeria tops this list.

Here are the worst 13 slums in Africa according to MT:

Kibera, Kenya
Kibera is famed for being the largest urban slum dwelling in the African continent. It is located on the outskirts of the capital city of Kenya, Nairobi. Kibera is considered to be one of the most dangerous slums in Africa because of the high levels of lawlessness and insecurity in the area.

It has an approximate populated of around 2.5 million dwellers. This is close to 50 percent of Nairobi’s population. It is characterized by sprawling iron sheet, timber, plastic and cardboard houses, poor sanitation as it lacks a sewerage system, lack of clean supply of water, high crime rate and last but not least, congestion.

Kroo Bay, Sierra Leone
Situated in Freetown, the capital city of Sierra Leone, Kroo Bay looks like a dumping site. It is filled with debris in every little space it has. It is one of the poorest places in Sierra Leone. Kroo Bay is faced with the challenge of poor sanitation to the extent that 95 percent of houses in this slum lack toilets and a supply of clean water.

Mathare, Kenya
Mathare is made up of a collection of quite a number of slums. It is located on the outskirts of Nairobi city. It is estimated that over five hundred thousand people dwell call this slum home.

It is considered as one of the worst slums in Africa because a lot of gang violence and robbery is experienced here. The illicit brew is also made and sold in this slum by some of its inhabitants as a source of livelihood.

West Point, Liberia
Located on a peninsula between rivers Saint Paul and Mesurado, which then flow into the Atlantic Ocean, is the West Point slum. The slum’s estimated population amounts to over seventy-five thousand people.

The greatest challenge facing the inhabitants of this slum is overpopulation and waterborne and bacterial diseases such as cholera and tuberculosis.

Makoko, Nigeria
This slum dwelling is situated in Lagos, Nigeria. It is one of the oldest slums in this country which originally started off as a fishing village residence. Makoko has a population of over eighty-six thousand persons. Housing in this slum is in such a deplorable state such that many structures are erected on stilts above Lagos Lagoon.

Korogocho, Kenya
As its name suggests, Korogocho means crowded. It is located in a shanty town on the outskirts of the capital city of Kenya, Nairobi. Over two hundred thousand persons live in this slum.

Kawangware, Kenya
Just like its predecessor, Kawangware is located within the environs of Nairobi city. It has a very large population, which keeps on growing with each passing day. Kawangware is plagued by poor sanitation, overcrowding and inadequate supply of safe drinking water such that many inhabitants have to purchase drinking water. This is quite unfortunate because most of them are not financially endowed, to afford them drinking water on a daily basis.

Kiambiu, Kenya
This slum dwelling is one of the many located within Nairobi city. With a population of over fifty thousand residents, Kiambiu faces the challenge of poor sanitation, lack of infrastructure such as good roads and last but not least, inadequate supply of clean water.

However, of late, the government, in conjunction with some foreign donors, have started water and sanitation projects in this slum to alleviate some of the challenges the residents of this slum face and improve their standards of living as well.

Agbogbloshie, Ghana
Its population amounts to over eighty thousand persons. Apart from being labeled as one of the most dangerous slums in Africa due to high crime rate, it is also the largest dumping site in the world. The most saddening thing about this is that an electronic dump site is also located here.

Clara Town, Liberia
Clara Town is quite a mess. Located on a swampy place on Barshod Island, its streets are usually flooded most of the time. Stagnant water has caused the locals many health hazards such as malaria, water-borne diseases such as cholera and bilharzia.

Ilaje, Nigeria
Dwellers of this slum located in Nigeria live under sordid conditions. The slum is densely populated and is characterized by poor sanitation, lack of clean water, and last but not least, water-borne diseases such as cholera which is mostly caused by poor hygiene. High levels of crime and insecurity have made it one of Africa’s worst slums.

Kangemi, Kenya
Of all the slums located in Nairobi, Kangemi is the one that is home to many ethnic groups of them all. Over one hundred thousand people live in this slum. Kangemi is comprised of thousands of sprawling tin and mud houses. The major challenge faced by its inhabitants is lack of a sewerage system to channel their waste. This has led to channeling of effluent to the Nairobi River using trenches dug up by the locals.

Conclusion
Tough economic times and joblessness have pushed persons into living in deplorable conditions. Africa’s list of worst slums has depicted the effects of the above-mentioned factors in detail. If only governments of African countries could diversify their economies and increase job opportunities, then the living conditions of slum dwellers would improve and some would even migrate to other better dwelling places.