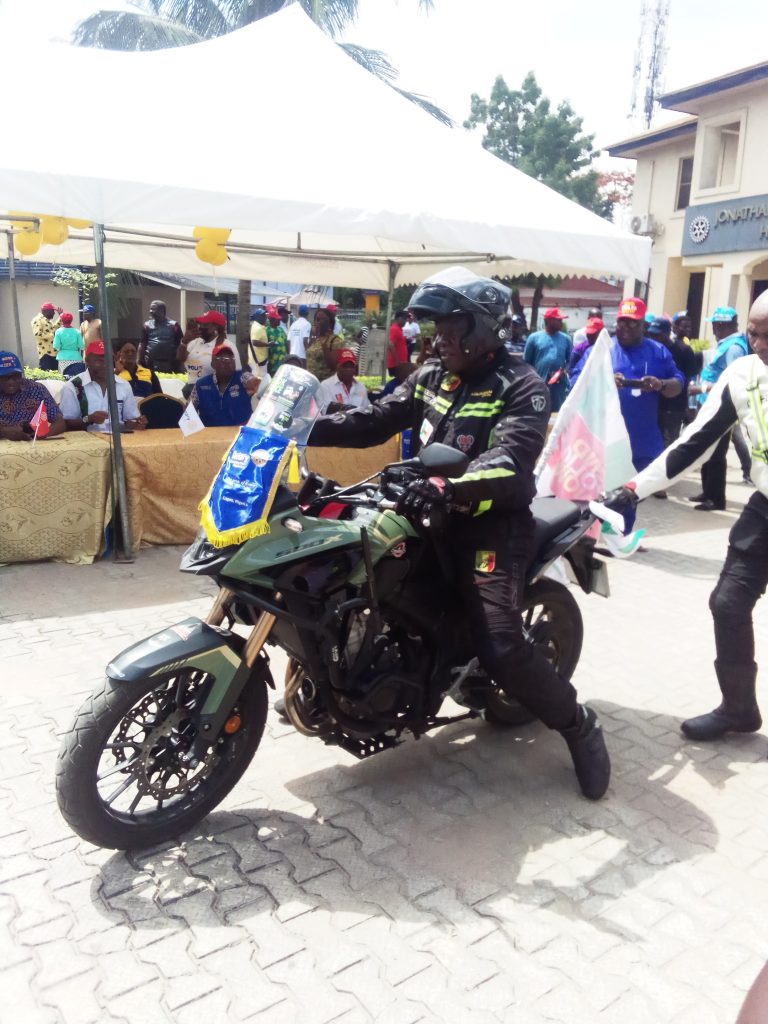 The Nigerian Biker, Kunle Adeyanju, who embarked on an adventurous trip from London to Lagos for charity, arrived Lagos on Sunday afternoon.

The News Agency of Nigeria reports that Adeyanju spoke about his adventure at a reception organised in his honour by the Ikeja Rotary Club District 9110.

An elated Adeyanju extolled the beauty, cultures and hospitality of Africa and urged Africans to write their stories themselves.

Adeyanju said there were lots of interesting discoveries as well as challenges everywhere during the 41 days bike ride from London to Lagos.

” Every day you ride, every kilometre is full of challenges.

“And these 9,000 kms took me not just to the capital, but took me to the villages, the towns, and the hinterland, the desolate place, the isolated area, the most inhospitable places.

“All through this journey through Africa, I discovered a true African story.

I was able to communicate the message of polio to the people who were receptive towards me,” Adeyanju said.

He said it was fulfilling to see many people from across Africa accept the message to end polio in Africa.

He said that it was fearful beginning the journey because all the intelligent reports concerning the countries of Africa, which he was to pass through, were damning.

” But after travelling over 9,000 kms to some of these isolated places, I discovered the African story and I discovered that African people are nice.

” Africa is a beautiful continent. It is a land of diversity. where every kilometer, every meter you cover, you discover something interesting, something that educates you.

“I know this was like an ‘aha’ moment for me. And I said, this is not what I read about Africa.”

He said that Africa was more than the descriptions of safari and animal kingdom assumed by people of the West.”

According to him, his adventure from London to Lagos changes the perception he has about Africa.

Adeyanju noted that all the funds generated from the adventure were for charity; some percentage to the end polio campaign, while others to his Rotary project for 2022.

The biker, who is a rotarian, is the District Governor-elect of the Ikoyi Rotary Club.

Bello said that the adventure had made Adeyanju an international brand.

According to him, Adeyanju has broken all known barriers to achieve the feat.

He said that Adeyanju had proved that nothing was impossible to a willing heart.

He praised his courage and determination in embarking on the adventure for charity.

The News Agency of Nigeria reports that friends and club members of Adeyanju were on hand to welcome and support him.

Some Rotarians from Ghana and Cote” d’ivoire also flew in to give Adeyanju a befitting welcome on his arrival in Lagos.

Share this on WhatsApp
Related Topics:AfricaarrivesextolsLagosLondonNigerian bikerrich uniqueness
Up Next