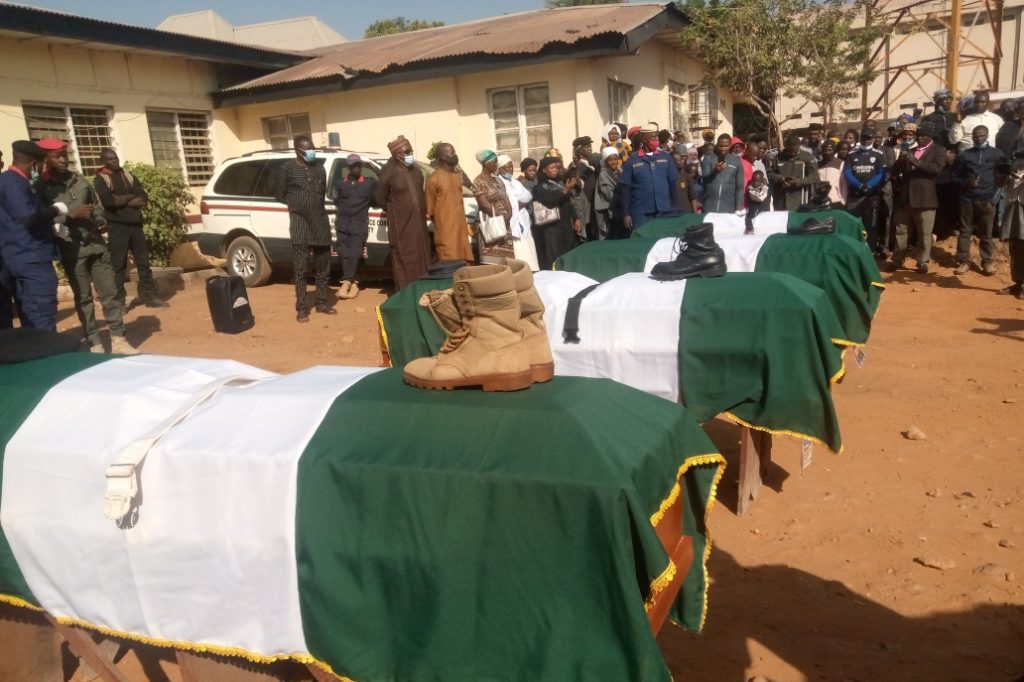 The Nigeria Security and Civil Defence Corps (NSCDC) Kaduna State Command, on Saturday handed over the remaining four corpses of its personnel killed by bandits to their families for burial.

The News Agency of Nigeria reports that seven personnel and five others where killed by bandits in an ambush in Kuriga village in Birnin Gawri Local Government Area of the state on Monday.

Earlier, the NSCDC had handed over the body of late Insp Fidelis Yusuf for final internment on Thursday, while ASC1 Shamsudeen Labaran was buried on Jan. 10 at Anguwan Dosa cemetery according to Islamic rites.

ASC ll Augustine Simon’s remains were, however, conveyed to Benue for burial on Friday.

The Commandant General (CG), NSCDC, Dr. Audi Abubakar, while paying his last respect to the personnel, said that the incident had brought sadness to the entire country.

Abubakar, represented by NSCDC Commandant Kaduna , Mr Idris Adah, noted that President Muhammadu Buhari, and the entire NSCDC staff and Nigerians were all saddened by the event.

“We don’t have the right to query God, it has happened and death is of course inevitable; this is their own day when ours comes, we shall all go,” he said.

He called on the personnel to see the deaths of their colleagues as a reminder that one day they would also be laid to their graves.

“Not withstanding, appropriate attention will be given to the families of this our slain brothers.

“We just have to take hearts, we don’t have control over such kinds of situation, every body should endeavour to be praying for the rest of their souls,” he said.

The CG, while consoling families of the slain officers, prayed to God for the repose of their souls.