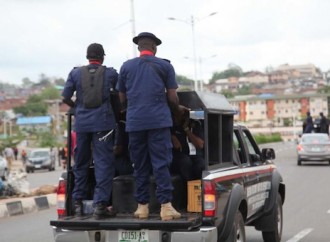 The Nigeria Security and Civil Defense Corps (NSCDC) said on Monday in Kaduna that it had arrested six tanker drivers who allegedly diverted 148,000 litres of Premium Motor Spirit (PMS) to the state.

Alhaji Modu Bunu, the state NSCDC Commandant, said this while parading the suspects before newsmen.

Bunu said that the tankers were impounded on Saturday at an undisclosed location within the state, adding that the product was meant for Abuja, Jos and Kano, but was allegedly diverted to Kaduna.

The commandant said that the arrest was based on intelligence information which led to the mobilisation of operatives to strategic locations.

He said that the suspects were arrested at about 12:15 a.m. on Saturday within Kaduna State.

“The third one with registration number BAU 262 XR was carrying 45,000 litres suspected to have been diverted.

“In the same vein, the remaining truck, a DAF 85, is without registration number and was conveying 33,000 litres of PMS.

“The apprehensive occupants of the DAF on sighting operatives of the NSCDC, abandoned the vehicle and took to their heels.’’

Bunu commended other security operatives in the state for the cooperation given to the corps and urged residents to be more vigilant and report suspicious movements to security agents.

“I want to commend the synergy between the corps and other security agencies, and I implore members of the public to also collaborate with the corps by reporting timely to us in the fight against vandalism and other forms of crime.

“We are determined to carry out our statutory mandate but without the cooperation of the public, the command may not achieve all we want,’’ Bunu said.

Bunu said that the suspects were being investigated and would soon be charged to court.