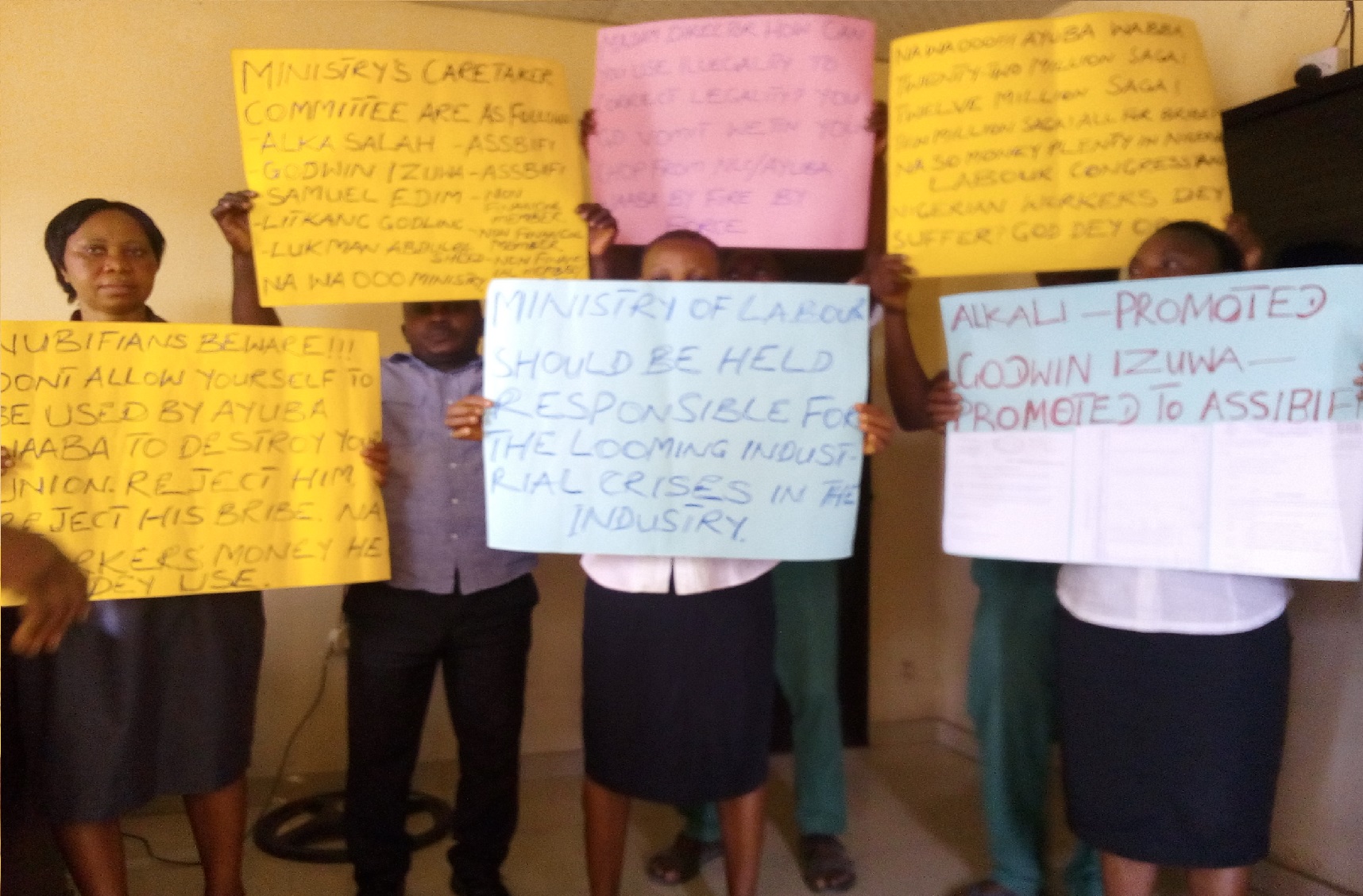 Share this on WhatsApp
Spread the love
The National Union of Banks, Insurance and Financial Institutions Employees (NUBIFIE) has said that it is prepared to stage an industrial action that will rock the nation’s finance sector, if nothing drastic is done by the Federal Government to halt the alleged misuse of office of the Federal Ministry of Labour to thwart laid down union process.

NUBIFIE’s President Comrade (Dr) Danjuma Musa made the disclosure during a press briefing held at the union’s secretariat to put the record straight on the Ministry of Labour’s unguided interference in union matters,which specifically bother on an unscrupulous inauguration  of a caretaker committee averse to the union’s constitutional provisions.

Some of the piqued members of the union present at the media parley, also held placards with inscriptions to drive home their point,“NUBIFIANS Beware!!! don’t allow yourself to be used by Ayuba Waaba to destroy your union. Reject him reject his bribe. Na workers money he dey use. “Ministry’s caretaker committee are as follows.

“Ministry of Labour should be held responsible for the looming industrial crises in the industry,”Madam director how can you use illegality? You go vomit wetin you chop from NLC/Ayuba Waaba by fire by force,Alkali-promoter Godwin Izuwa-promoted to ASSIBIFIE. 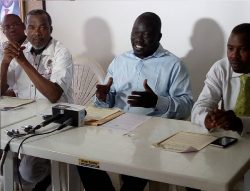 He also picked on the alleged illegal dissolution of a validly elected national officers of the union by the Director Trade Union Services at the Ministry of Labour and productivity to impose leadership on NUBIFIE.

Danjuma also querried the order issued that appointed members of staff in NUBIFIE all across the country proceed on compulsory leave.

“Members of staff of the union are not political office holders and has no nexus with the entire issues that Mrs. Akpan has been desperately trying to manufacture. Only appropriate organ of the union determines the continued employment of its paid staff and no one else, as it was contractual relationship.

He noted that the bias of the ministry to achieve a predetermined objective will be countered by vehement resistance from the union in the face of arbitrariness against the rule of law.

“A clear subversion of the rule of law and attempt to orchestrate industrial crisis in the finance Industry, what is at stake Was The autonomy and independence of industrial unions. Meddling into internal affairs of the union other than genuine mediation run contrary to the Law as well as established convention.

In a chat with the former Treasurer of  NUBIFIE Comrade Lukman AbdulRasheed who also jostled for the president office at the September delegate conference.

He was allegedly disqualified by the screening committee at about the time delegates were being accredited, which led to the factionalisation of the union executives along United Labour Congress ULC and Nigerian Labour Congress divides.
He emphasised that he was not out to decimate NUBIFIE, but to fledge a more virile and active union to the benefits of all members.
Share this on WhatsApp
Related Topics:Comrade (Dr) Danjuma MusaNational Union of Banks Insurance and Financial Institutions Employees (NUBIFIE)
Up Next