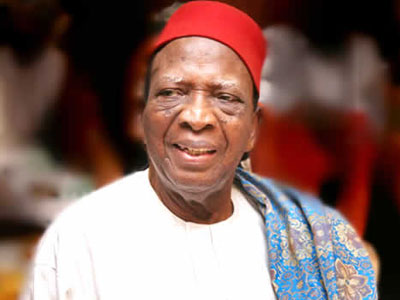 Share this on WhatsApp
Spread the love
Ben Nwabueze, a senior advocate of Nigeria (SAN), has faulted the June 12 declaration made by President Muhammadu Buhari.
In a statement, he personally signed, Nwabueze described the declaration as “unconstitutional, a masterstroke of mischief and insincerity and a deceitful contrivance”.
On June 6, Buhari announced the conferment of the Grand Commander of the Federal Republic (GCFR), the highest honour in the land, on MKO Abiola, while the investiture held on June 12.
The president also declared June 12 would replace May 29 as Democracy Day.
The development had generated mixed reactions among Nigerians.
“Nigeria, our dear country, should not be turned into a state where the President can, in his unfettered whim, set aside the law or do things contrary to the law; his June 6 2018 Declaration clearly affronts the law.”
Nwabueze said the president’s declaration “raises several issues concerning, first, the intention behind it, whether it is motivated by the public interest or by a political desire to secure the votes of Nigerians in the 2019 election, especially the votes of people of the south-west or to sow the seed of division among the members of the national assembly”.
“A motive of mischief seems evident on the face of the declaration,” he said, adding: “It is indeed a masterstroke of mischief and insincerity, a deceitful contrivance, suddenly and mischievously trumped up to rescue his dying image three years after his installation as president.”
The jurist said the annulled June 12 election deemed in law not to have taken place, and as such June 12 cannot be declared Democracy Day and a public holiday.
He also argued that Abiola, the presumed winner of the election and Babagana Kingibe, his running mate, cannot be awarded the national honour of GCFR and GCON respectively.
Reacting to the senate resolution that the Independent National Electoral Commission (INEC) should declare Abiola the winner of the 1993 presidential election, Nwabueze said the commission lacks the power to do so.
He said the powers of INEC, as conferred on it by paragraph 15 of the third schedule to the 1999 constitution, is “to organise, undertake and supervise” presidential and other listed elections, and that section 70 of the Electoral Act stipulates that the winner in an election “shall be declared elected by the appropriate returning officer”.
“The annulment of the June 12 1993 election is admittedly loathsome to millions of Nigerians because of its injustice, inhumanity and its culmination in the sad death of its presumed winner, Chief Abiola; its error has been acknowledged and duly apologised for by its author, Gen Babangida.”
“The annulment should therefore be set aside, but that should be done in due form of law, i.e. in a manner required by law, meaning by an Act of the National Assembly, not by the President’s unilateral Declaration unbacked by an enabling law.”