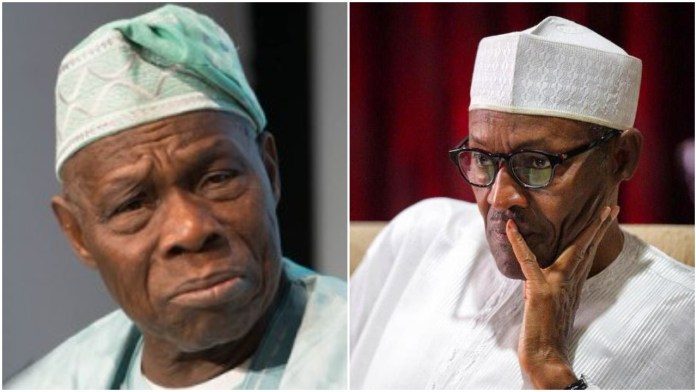 Barely 48-hrs after his widely-covered state of the nation address, former President Olusegun Obasanjo has taken another shot at President Muhammadu Buhari, describing him as a sick person.

Recall that in the address Obasanjo had alleged that Buhari was taking the country down the path of Sani Abacha, former military dictator.

And in response, President Buhari through his spokesman, Garba Shehu had accused Obasanjo of being hostile to leaders he has no control over, promising to teach him a lesson he will never forget.

“What Chief Obasanjo and his co-travelers in the PDP should expect is that from the outcome, we will teach them a political lesson that they will never forget. This margin will be much bigger than we had in 2015.”

Obasanjo in his latest attack during an interview with BBC Yoruba said Buhari is “sick in the spirit, body and soul”.

The former president said Buhari needs retire and allow another person take charge of the country.

Obasanjo said when people complain to him that the next person may not do better, he tells them that, that is the beauty of democracy

“Buhari is sick in the spirit, body and soul. Let’s beg him to go and rest. He has tried his best. Let give chance to another person,” Obasanjo said.

“When people ask me that what if the next person is not suitable, I tell them that is the beauty of democracy.”

In his state of the nation address on Sunday, Obasanjo had accused Buhari of taking the country back to the Sani Abacha era.

He accused the Buhari government of abusing institutions of state.

“EFCC, Police and Code of Conduct Tribunal are also being equally misused to deal with those Buhari sees as enemies for criticising him or as those who may not do his bidding in manipulating election results. Criticism, choice and being different are inherent trade mark of democracy. If democracy is derailed or aborted, anarchy and authoritarianism will automatically follow,” Obasanjo had said.