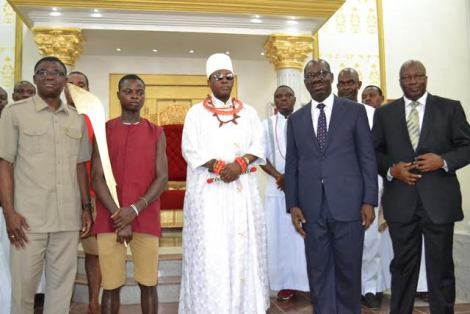 EDO State governor, Godwin Obaseki, has paid an official visit to the palace of the Oba of Benin, Omo N’Oba N’Edo Uku Akpolokpolo Oba Ewuare II, where he called for support from the Benin Kingdom for a more friendly land administrative system that will be investor-friendly in tune with his administration’s desire for more development for the state.

Obaseki led members of his government including his deputy, Philip Shaibu, Secretary to the State Government (SSG), Osarodion Ogie, Chief of Staff, Taiwo Akerele and other top government functionaries on the visit to the monarch. Besides, he said his administration would ensure a friendly environment to make Edo one of the cleanest states in Nigeria.

On security, Obaseki said he would strengthen existing community policing structures like vigilante groups to share information with conventional security agencies like the police and DSS to have a safer society. This is just as he said in the next few weeks, he would unveil plans to actualize his promise of creating 200,000 jobs for the people of the state.

“This kingdom used to have the best land tenure system in Nigeria, unfortunately we have lost that pride today. We want to deal with the issue of land properly so that can attract private investment to the state, we need your support to do this.” In his response, Oba Ewuare carpeted the activities of community development associations who have taken over sales of lands with very unfriendly conditions.

“May I use this opportunity to seek the state government’s support in eradicating the menace of Community Development Associations in Edo South in particular and Edo state in general,” he said.

He, however, charged Obaseki to ensure fulfillment of his election promises to the people.

“I have no doubt in my mind that you will deploy all your wealth of experience both in the private sector and in the immediate past administration of Comrade Adams Oshiomhole to effectively utilise the human and material resources in Edo state to take it to greater heights through good governance and provide the good people of Edo state the good dividends of democracy,” the Oba said.