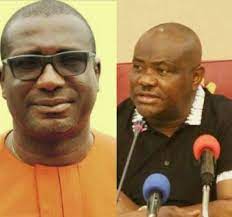 Share this on WhatsApp
Spread the love
The Sole Administrator, Rivers State Waste Management Agency (RIWAMA), Bro Felix Obuah, has commended Governor Nyesom Wike of Rivers State on his achievements in the past six years of the governance of the state on the platform of the Peoples Democratic Party (PDP). Obuah stated that Rivers State has emerged stronger and more united under the leadership of Governor Wike, describing  the Governor as a vision bearer for the oil rich multi- ethnic Rivers State.

Bro Obuah, former State Chairman of the PDP in Rivers, under whose leadership, Wike won the governorship election back to back in the six years of purposeful leadership, remarked that  all the erstwhile sentiments that beclouded Rivers State people have evaporated and crystallized into one united whole enviably tagged ‘Rivers people’

The RIWAMA Sole Administrator in a statement, titled: “Why we celebrate’ Governor Wike”, indicated that despite the current economic hardship in the country, the magnitude of which is unprecedented in the history of Nigeria no thanks to All Progressives Congress (APC)-led federal government, Governor Wike has been able to demystify governance as something achievable if the political will is there and the right peg rightly fitted into the right hole.

The former PDP State Chairman highlighted that the two years of Governor Wike’s second term in office has been an era of massive infrastructural development, linking roads and bridges between various communities across the 23 Local Government Areas of the State; monumental flyovers and overhead bridges in the State capital, Port Harcourt; aimed at easing the perennial traffic congestions that had become a torn in the flesh of commuters; rehabilitation and reactivation of moribund health facilities across the State as well as dilapidated educational institutions.

Obuah stated that other reasons for celebrating the pragmatic leadership of the governor include: elevation of State tertiary educational institutions to befitting status, human capital development, effectuating the State judiciary and funding the security agencies in the State for performance optimization etc.

The RIWAMA Sole Administrator also commended Governor Wike for a cleaner, neater, friendly and safer environment better than he met it on May 29, 2015 when he was sworn in.

Bro Obuah expressed the belief that the best is yet to be seen of the enigmatic leader and Governor par excellence, urging Rivers people to rally round the people’s governor for greater breakthroughs in the years ahead.

“We are, indeed, inspired by your ideas and courage. Congratulations Your Excellency and may God continue to bless and strengthen you”, Bro Obuah stated.