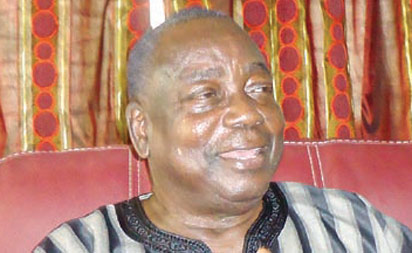 Share this on WhatsApp
Spread the love
From OSEMWENGIE BEN OGBEMUDIA, Benin City
Dr. Samuel Osaigbovo Ogbemudia, a former Governor of Midwest and later Bendel State, died on Thursday, 9th March, 2017, at 11.09am in a private hospital in Lagos.
It is curious that Ogbemudia prepared his grave five years ago close to his mother’s grave, waiting for death to strike.
Also, a Family source said Ogbemudia has earlier warned his children not to deposit his remains in the mortuary, rather, his body should be kept in the house before the final burial.
Ogbemudia has been battling with serious ailment in the past five years before he finally gave up the ghost last Thursday at the age 84 years.
Ogbemudia was a former Governor of Mid-West State in the 1970s as a military officer. He retired from the Nigerian Army as a Brigadier. He went into private business which include oil palm farm, hotels and tourism.
Ogbemudia, again, became Governor of Bendel State in October 1983 before the military junta led by major General Muhammadu Buhari truncated that democratic regime on December 31, 1983, and the military took full control of the polity on January 1, 1984, when Buhari was announced as the Head of State.
Ogbemudia made history in being elected Governor of Bendel on the platform of the National Party of Nigeria (NPN) when Chief tony Anenih was NPN Chairman in Bendel State. Anenih led the NPN to defeat late Professor Ambrose Alli, who was elected Governor of Bendel State in 1979 on the platform of the Unity Party of Nigeria (UPN) but was stopped from a second tenure by Ogbemudia and the NPN.
Share this on WhatsApp
Related Topics:Bendel StateDr. Samuel Osaigbovo Ogbemudia
Up Next