The Ohanaeze Ndigbo Youth Council worldwide, on Thursday, condemned the recent travel advisory issued by the Foreign and Commonwealth Office of the United Kingdom on 21 states in Nigeria.

Recall that the UK government in a statement had warned against all trips to Bauchi, Zamfara, Kano, Kaduna, Jigawa, Katsina, Kogi and within 20km of the border with Niger in Sokoto and Kebbi States, non-riverine areas of Delta, Bayelsa, Rivers and Abia States and some other states in Nigeria.

Isiguzoro maintained that the South East was the safest haven in Nigeria for investors.

In a statement he signed, Isiguzoro said: “The leadership of Ohanaeze Ndigbo Youth council worldwide, contrary to malicious intent and false information of the Foreign and Commonwealth Office of the United Kingdom, declared that one or two States in South East Nigeria is(or are)among the 21 States unsafe for British National to travel to, as total fallacy and inclusion of any South East State is an error that must be corrected and debunk such unfriendly report.

“Ohanaeze Ndigbo Youth council worldwide wishes to inform the World, as the watchdogs of the South East Nigeria,We declare that “South East Nigeria as the Safest Haven for Investment and Tourism”, There’s no record of any act of terrorism or any Terroristic Activities in the soil of South East Nigeria including Abia State, We urge our potential investors and Tourists to disregard any fantastically fabrication created by the fifth columnist to derail the huge business investment coming to Enyimba Economic City.

“We applaud the South East Governors led by Gov Dave Umahi for putting up a world-class Security intelligence through prompt motivation of Security agents for efficiency and effectiveness in the discharge of their duties by our gallant security agents, These Governors as chief Security officers in their various States had improved the Security of their various States individually and collectively as South East Governors.

“We warn against malicious and doctored report by agents of destabilization and deception Masquerading as Credible source feeding malicious report to reputable organization with a devilish intent to cause disaffection and derail the huge economic investments coming towards the South East Nigeria especially the ” New Dubai” in Nigeria called Enyimba Economic City the Global business hub in the South East approved by the Federal Government as Free trade Zone and Special Economic Zone Under the Made in Nigeria For Export. We believe that UK report of including Abia State killed the dream of EEC, but their inclusion of Abia and mischievous act is dead on arrival, and urge the general public, especially our foreign investors to disregard the report.” 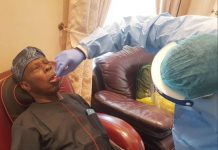