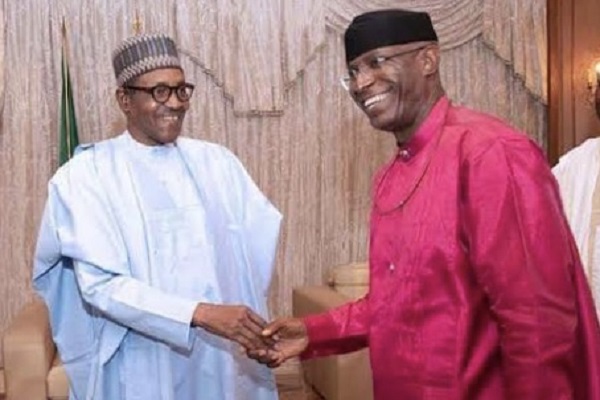 The governorship candidate of the All Progressives Congress (APC) in Delta State, Deputy President of the Senate Ovie Omo-Agege, visiting President Muhammadu Buhari at the State House, Abuja, dismissed the notion that the Peoples Democratic Party (PDP) has firm grip of Delta State.

Omo-Agege in a media interaction after having a closed door meeting with President Buhari declared that “Delta is very ripe for the taking” saying that it is serious misconception to tag Delta, a PDP state.

Omo-Agege had declared: “That is a very serious misconception to tag Delta State, a PDP state. Delta is very ripe for the taking.

“We’re determined to achieve this; we’ve been going round each local government, ward by ward, making the case; drawing the attention of the people of the state to the mis-governance and lack of performance on the part of not just Okowa but the PDP led administration in the past 14 years.

“The message to people is resonating; we’ve been able to make the case to them that Delta State is supposedly a very, very rich state.

“This is because of the receipts we have gotten from federal allocation, inclusive of a 13 per cent derivation and other resources that come to the state by way of Internally Generated Revenue.”

The governorship candidate said that by APC’s reckoning, since the Okowa administration came into office, Delta State had received close to about N4.2 trillion.

“And this came, like I said, by way of federal allocation. It came by way of 13 per cent derivation, and also about N400 billion that the state has borrowed,” the APC governorship candidate said.

He said that the incumbent governor, Ifeanyi Okowa, had nothing to show for the N4.2 trillion earned by the state in the last seven and half years.

The Deputy Senate President said that he was in the Villa to confer with the President on national issues.

According to Omo-Agege, Okowa’s administration has yet to settle gratuities and pensions of workers for up to nine years and has yet to commence payment of the N30,000 minimum wage despite the financial status of the state.

He said that in spite of being a medical doctor, the health sector in Delta took a nosedive under the Okowa’s administration.

Omo-Agege also accused the Delta governor of betraying his counterparts in the South by accepting to be a running mate to the PDP Presidential candidate in spite of agreement that the presidency should shift to the South, after the eight year tenure of President Buhari, a northerner.

He said: “It is the position of Deltans and most especially, indeed the entire southern Nigeria, that given the fact that we have supported Mr President, Muhammadu Buhari, for the past eight years, it’s only fair, just and equitable that the next President should come from southern Nigeria.

“And it may also interest you that Okowa as the Chairman of the Governors Forum in South-South was one of those who led this charge, and met in Asaba, where the case was made.

“So to the chagrin and disappointment of many at home, Okowa betrayed that cause by selling away our right to the presidency, and instead going for office of a Vice President at a time when the entire country is offering us the presidency.

“So, our people are not taking this treachery kindly and determined that they will punish Okowa.”

The Deputy Senate President, who insisted that his chance of winning the governorship election was bright, assured that he would address the challenges of unemployment, insecurity and infrastructure decay in the state on assumption of office.

He also said he would make the business environment attractive to investors to return to the state in order to create employment for the people.