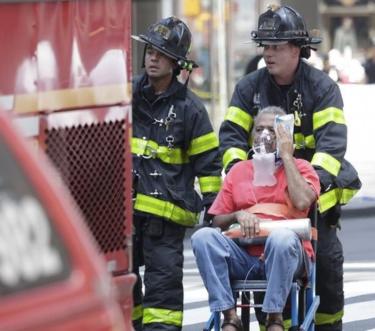 What appears to be an accident in New York City has led into the death of one person and 19 others seriously injured after a car drove on to a pavement in Times Square.

Agency reports disclosed that the driver has been taken into custody while the area has been sealed off, according to the New York Police Department.

Although it is still premature to say whether the accident was masterminded or a terrorist act, it was learnt that the vehicle reportedly jumped the kerb at 7th Avenue and 45th St near the city’s popular tourist spot.

The red Honda was partially on its side on the pavement with smoke and flames spewing from the bonnet.

The injured were being tended to by emergency crews

It was gathered that the 26-year-old driver was being tested for alcohol,
as available evidence indicate that he has a history of driving while intoxicated.

The victims were being taken away on stretchers and other casualties strewn across the walkway.

Police reportedly said the driver “lost control” and the collision appeared to be an accident.

A witness told Reuters the vehicle drove against traffic before hitting the kerb and striking pedestrians even as the FBI has commenced investigation of the unfortunate incident.

A witness, Ed G Val, said “A woman in front on the sidewalk was hit and tossed before then car reached 44th street [and] continued ploughing people down at full speed up to 45th street where it was stopped after crashing into more people and the light posted pictured.”

Share this on WhatsApp
Related Topics:AccidentNew York CityTimes Square
Up Next