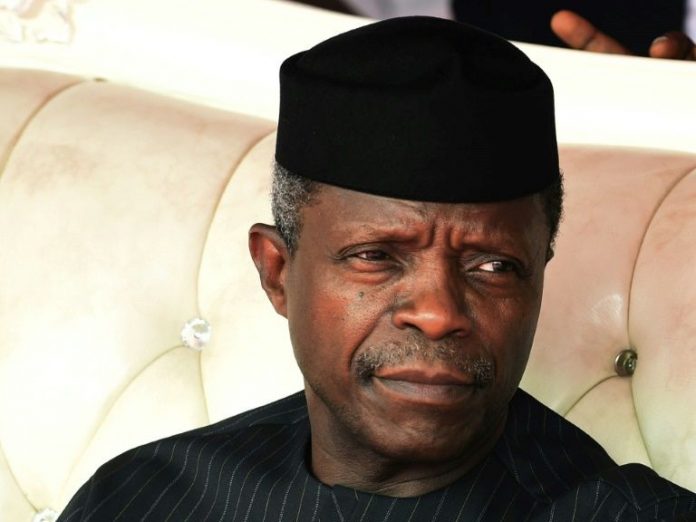 There are emerging indications that the northern oligarchy is becoming obsessed over the tendency of ailing President Muhammadu Buhari becoming incapacitated to complete his tenure and Acting President Yemi Osinbajo becoming the substantive President of Nigeria. National Daily gathered that the much celebrated cabal in Aso Rock have been having sleepless nights, holding clandestine meetings with the Senate President, Dr. Bukola Saraki, and some other prominent northern elite on how to get Osinbajo out of power and ensure that the President remains in the North under whatever circumstance.

There was the innuendo that Senate President Bukola Saraki has formed an alliance with a cabal within the Aso Rock conspiring to cause confusion and disorder in the polity to forestall Acting President Osinbajo from acquiring full presidential powers.

National Daily also gathered that the emergent balance of power formation in the North has found it impracticable in the past few weeks to bring back ailing President Muhammadu Buhari from London, the United Kingdom.

It was said that Buhari’s doctors have continued to insist the ailing President cannot function or run Nigeria in his present state of health, “but the cabal, which is using ethnicity and religious sentiments to foment deep-seated animosity against the Acting President, has continued to explore its options.”

An online publication, SaharaReporters had alleged that the perceived cabal led by Isa Funtua, a failed businessman who was owner of now bankrupt Bullet Construction Company, met recently in Saudi Arabia with Saraki, who led some senators. “Also, in the Senate President’s group were Ahmadu Adamu Mu’azu, a former Bauchi State Governor and ex-chairman of the Peoples Democratic Party, who fled Nigeria on exile, as well as Bala Mohammed, a former Minister of the Federal Capital Territory, who is undergoing trial for money laundering,” it was alleged.

It was alleged that the cabal held several meetings with Saraki’s team; noting that the select senators having been sponsored to the lesser hajj on fat allowances from the coffers of the National Assembly.

At the meeting, the cabal was purported to have decided on a number of options to force Acting President Osinbajo out of power. The options include bringing President Buhari to Nigeria in whatever condition he might be. “That plan was to use the gravely sick president’s presence to implement their agenda by insisting he is not the first leader to become sick in office, citing those countries whose leaders were sick but remained in office,” it was alleged.

That option was said to have created difficulties on account of Buhari’s precarious condition, including lapses of lucidity. It was further purported that, “Sometimes… the president does not even remember where he is. Besides, Buhari often loses his voice as a side effect of one of the drugs prescribed for him by UK doctors.”

Further innuendoes unveiled that a second option considered by the cabal was to force Osinbajo to accept the Attorney General of the Federation, Abubakar Malami, as the Vice President. “In that event, the cabal would prevail on President Buhari to resign, provided that Osinbajo agreed to drop all corruption cases against senators and withdraw the Federal Government’s appeal against a verdict of the Code of Conduct Tribunal that cleared Saraki of charges that he violated asset declaration laws. In addition, Osinbajo would commit to remove Ibrahim Magu from the chairmanship of the Economic and Financial Crimes Commission (EFCC).”

It was further alleged that the third option weighed by the cabal was to create intractable political crisis in the country such that will incite a military takeover of power. “However, that option proved problematic when Western diplomats sternly signaled that they would not accept a military coup in Nigeria as such an intervention could lead to Nigeria’s break up.”

More so, National Daily also observed former President Olusegun Obasanjo, recently admonishing the military against the temptation of taking over power from the civilian leaders.

However, it was alleged that, “Even so… the cabal members had not altogether abandoned that option.”

There was a further insinuation that, “On return from the hajj, Saraki held several meetings with senators loyal to him and directed them not to entertain any motion calling for Buhari’s resignation unless his own position as the prospective Vice President was assured.”

Also, Isa Funtua was said to have met with numerous northern politicians, powerful civil servants and military officers and warned that the North could not afford to “lose power” to the Yoruba. He was said to have reminded them that, when former President Umaru Yar’Adua died, the North ceded power to Goodluck Jonathan, an Ijaw man they thought would be easy to manipulate. “However, within a few months of assuming the presidency, Jonathan,” he had lamented, “gave all the important appointments to his people.” Funtua was alleged to have warned that the Yoruba were too smart to be left with power for the remainder of Buhari’s term.

“It is to be noted that the sudden resurgence on Tuesday of senators’ obsession with removing Magu was not a coincidence. Some top National Assembly sources revealed that the demand for Magu to be fired was the first salvo in a planned set of orchestrated moves meant to subvert the Nigerian constitution and avert a potential Osinbajo presidency.

It was alleged that “Osinbajo’s offense… is that he has stood solidly behind the President in the nomination and preference of Magu as EFCC Chairman.”

However, National Daily investigation revealed that the Magu’s controversy is clearly a constitutional issue which the Presidency, particularly, Acting President Osinbajo, undermines the licit role of the National Assembly in appointments made by the President.

Thus, the Magu controversy may not wholesomely be a conspiracy but a resistance to the usurpation or limitation of the powers of the legislature.