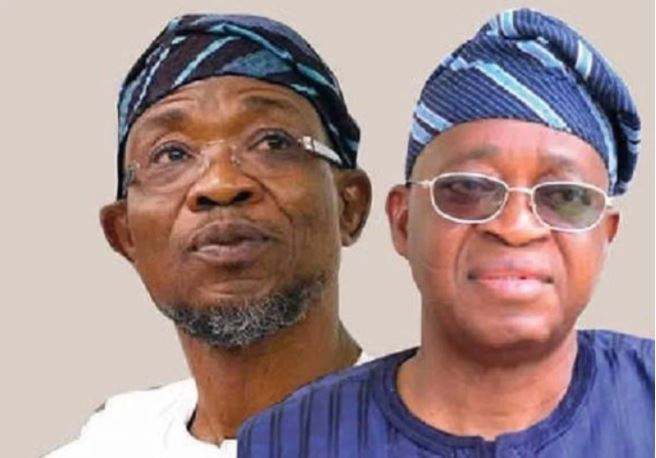 The Muslim Rights Concern (MURIC) on Monday gave seven days ultimatum to the Minister of Interior, Rauf Aregbesola, and Governor Isiaka Gboyega Oyetola of Osun State to resolve the conflicts between over the control of the ruling All Progressives Congress (APC) in Osun State.   deepens, has waded into the conflict. The Director and founder of MURIC, Professor Ishaq Akintola, in a statement on Monday, insisted that the two APC leaders in Osun State must resolve their dispute within seven days to prove that they are true Muslims who can settle any conflict for the sake of Allah.

Professor Ishaq Akintola, in the statement declared: “The rift between the Minister of Internal Affairs, Rauf Aregbesola, and the Governor of Osun State, Isiaka Gboyega Oyetola, has been in the public arena for more than two years now. All efforts made by stakeholders, including Muslim leaders, to settle the feud have proved abortive.

“We have decided to wade into the squabble because Muslims in the South West will be the worst hit if the rift is allowed to continue ad infinitum. Already, it has become a major embarrassment to Muslim leaders in the sub-region. Muslim youths are also entertaining fears over the ugly development. Apart from this, MURIC’s office has been inundated with calls for our intervention. MURIC’s staunch belief in dialogue and its commitment to it over the years is also another cassu belli of our intervention.

“To cap the edifice, the Muslim Rights Concern is deeply concerned because Allah gave specific instruction to Muslims regarding this type of development. This instruction is in the Glorious Qur’an 49:10. The verse describes Muslims as ‘brothers’ (innama al-mu’minuun ikhwatun) and commands members of the Ummah to intervene in disputes for the purpose of reconciling two feuding Muslim brothers (faslihuu bayna akhwaykunm).

“We appreciate the intervention of Muslim leaders in this dispute. But it is because those efforts are yet to yield the desired result while the rift has already been blown open that MURIC has opted for this intervention. More often than not, parties in disputes tend to forget that their rancours bring sadness and agony to those who love them in particular and other stakeholders in general.

“The question is what is at stake and we affirm that a lot is at stake because when two elephants fight, it is the grass that suffers. The ongoing face-off is likely to affect the fortunes of both Aregbesola and Oyetola in the coming gubernatorial election in Osun State this year although they may not acknowledge this fact now as both gladiators are still grandstanding.

“It is also likely to ricochet on the rumoured presidential ambition of their principal, Asiwaju Bola Ahmed Tinubu. A divided camp cannot fight on one front. Neither can it speak with one voice. For the past two years, MURIC has been calling for a Yoruba Muslim as the next president of this country and we still stand by this. But as it stands today, this bitter quarrel between the two most prominent Muslim politicians is likely to scuttle our aspiration.

“This is why we cannot continue to fold our arms to watch by the ringside while the two combatants slug it out. We must find a way to de-escalate tension. If the combatants will not listen to Muslim leaders who have allegedly pleaded with them in private, we have a duty as a Muslim rights group to task both of them in public. This is a case that is already known to every Dick and Harry anyway and people are wandering why the Muslims have not been able to douse the tension.

“We hereby call the attention of the Minister of Internal Affairs, Rauf Aregbesola, and the Governor of the State of Osun, Isiaka Oyetola, to the hadith of Prophet Muhammad (SAW) in which he said, ‘Two Muslims should not engage in a quarrel beyond three days. The one who first extends greetings to the other is the better Muslim.’

“It is our desire to leverage on the above hadith by asking both of them who is the better Muslim, Aregbesola or Oyetola, to be or not to be? That is the question.  Who has deeper Imaan (faith) between the two? Who will listen to the hadith first? Who will take his handset and say ‘Salaam Alaykunm’ to his Muslim brother first and follow it up with a visit? Who will be the first to simmer down? Who will be the first to tell his loyalists to stop the intrigue? Who will show the world that the bond of Islam is stronger than the camaraderie in a political party?

“Both politicians have seven days to act. We have no apology for making this demand of them because Allah will ask all of us what role we played in the lingering fracas, the smouldering scandal, and the shameful and embarrassing rigmarole. We want Aregbesola and Oyetola to know that there are conscious Yoruba Muslims in leading Islamic organisations who are monitoring this development and they are waiting to see how they will react to this demand.

“They want to know what Aregbesola or Oyetola consider as their major priority: Islam or politics? As Muslims, are the two politicians aware of the eschatological implications of being involved in politics?

“Are they aware that a Muslim politician must not drop Islam behind while going into politics, business or anything at all? Are they aware that this is the import of the verse ‘Idkhuluu fil silmi kaafatan’ (i.e. enter into Islam wholeheartedly, Glorious Qur’an 2:208)? Are they also aware that politics ends in this world and that Allah will ask them how they played it yaom al-Qiyamah (the Day of Ressurection)?

“While we have no doubt that both politicians are good Muslims who have contributed immensely to the development of their people in the past, we must bring to their attention the hadith of the Prophet (SAW) in which he warned that ‘If two Muslims face each other with their swords, then both of them are dwellers of hell fire’.

“Both Aregbesola and Oyetola deserve al-Jannah because they are Muslims and because they have performed excellently well in office. But they should not endanger their chances in al-Akhirah (the Hereafter) with this bickering, based on the above hadith. We hold the two Muslim politicians in high esteem and we will continue to do so as long as they comport themselves in a manner befitting good Muslim politicians who have the fear of Allah in their hearts. Well, the clock has started ticking. They have seven days to prove the depth of their Imaan as well as their love and concern for the Ummah.”