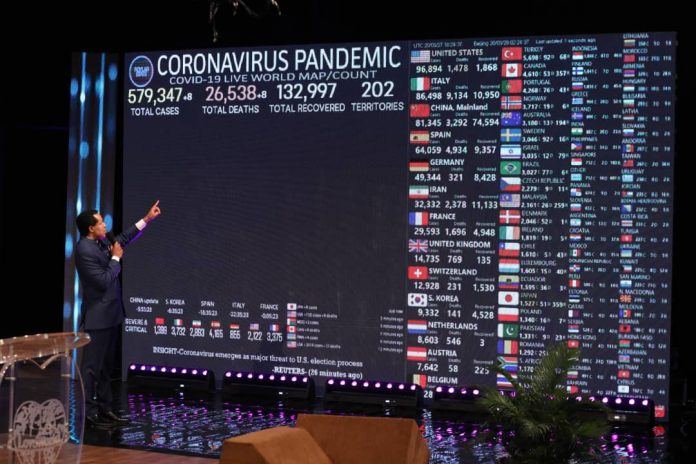 Concerned by the spate of the Covid 19 pandemic, over 3 billion people across the globe joined Pastors Chris and Benny Hinns to pray against the global challenge posed by the spread of the Corona virus.

The programme which held on Friday 27th March, was tagged the “Global Day of Prayer.”

According to the data, effectively, every country on earth on all continents (Africa, Europe, North America, South America, Asia, and Oceania) had people watching or listening and praying during the Global Day of Prayer.

Back-end statistics had it that there were online participation from 247 countries and territories of the world (i.e all nations) including the Vatican.

Also it was transmitted on 472 Radio stations in 190 countries.

In his comment during the prayer session, the President of Loveworld Inc., Rev Chris Oyakhilome said “Jesus gave us authority in His name and He told us to use it. We have to use his authority. We cannot be afraid of anything and that’s why we pray in the Name of Jesus and we command peace in our nations.”

Explaining the dispensational understanding that inspired the “Global Day of Prayer,” he said, “in God’s calendar, timing is important and the question we should ask is: what time is it now; what time are we living in today and what does the future hold?

According to him, “these things are not new, they are just happening at different levels. There has been a lot of evil and killings before. The difference might be that there were visible people who were responsible before, but now it is an invisible person behind the killing now. Although the killer is invisible, there are various key players now. Thank God we know how to deal with these kind of situations as we pray.

“There are forefronts to what the enemy is planning. Look at what’s happening now. The world has never had an opportunity to bring in negative policies like now. We know how to deal with these kind of issues. When we pray things happen. 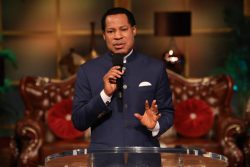 “The future of the nations is spoken of in the bible. What is currently happening is not a surprise. It’s important to know what the future holds for whatever country you may be living in. It’s time to take Christianity seriously. What’s happening now is one of the signs of the coming of the Lord.

What’s happening now is supposed to be in full action after the rapture of the church. The signs are there everywhere. We don’t have so much time. The coming of the Lord is very near. It is so close; the things that are being prepared now are supposed to be prepared after rapture.

On the question of the Antichrist manifesting to rule the world today, Pastor Chris said we don’t have to be bothered about the antichrist because he cannot show up now; that’s not possible because “we (the church) will disallow him because it’s not his time though Satan would still like to have the antichrist show up now. He would definitely like to see these things happen now. Regardless of his efforts, they will still fail now because it’s not his time.”