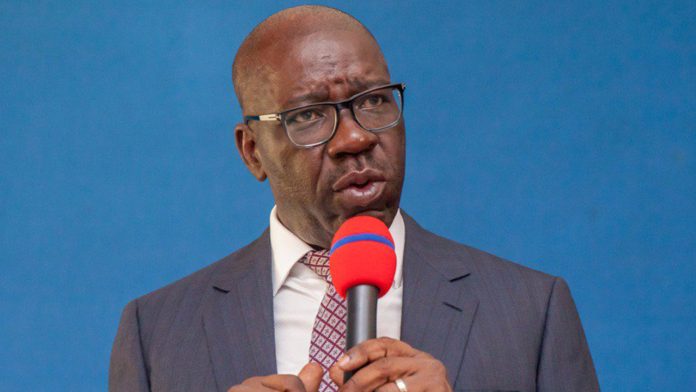 The Leaders of the Peoples Democratic Party (PDP) in Owan – West Local Government Area, on Monday alerted Governor Godwin Obaseki on the need to allow the elected council executives complete their tenure in office as is expected of the governor. The PDP leaders, however, commended Governor Obaseki for the appointments of Senior Special Assistants (SSAs) and Special Advisers (SAs) in their local government.

The PDP leaders in Owan – West LGA in a statement signed by, Chief Solomon Amu, LGA leader; Joseph Igure, Leader 2; Barr Adelaja Okun, Owan West Senatorial leader; Engr David Okoh Aigbodion, LGA Chairman; Moses Omogbai, LGA Secretary; and Barr. Friday Iriemi, Legal Adviser,
however, “used the opportunity to state categorically that these appointments were almost unsurprisingly one-sided as the New Entrants got Eight out of 11 Special Assistants (SAs) appointments and three out of four Senior Special Assistants (SSA) appointments.”
They protested that the aforementioned facts made it so embarrassing for them to read on social and print media that the said list of appointees arose as a result of a harmonization. “This is false in its entirety and nothing else can be a more deceptive posturing,” they said.

They argued that the appointments can but only be seen and termed as what it is, a GREEK GIFT, and never be tied to a non-existent and non-feasible harmonization.
while congratulating  “all those who made the list,” they “stated most vehemently that as the Governor intends to spend his four-year tenure, so, also do we as duly elected Party Executives in Owan West LGA.”

According to the leaders, “may it be made abundantly clear that We,  the Leaders of our great Party in Owan West LGA are too willing to parade a full compliment of our Authentic Executives if and when called upon to do so.

“We are, indeed, ready to stop at NOTHING to apply ALL LEGAL MEANS at our disposal to ensure that the constitution of our dear Party is followed to the letter.”