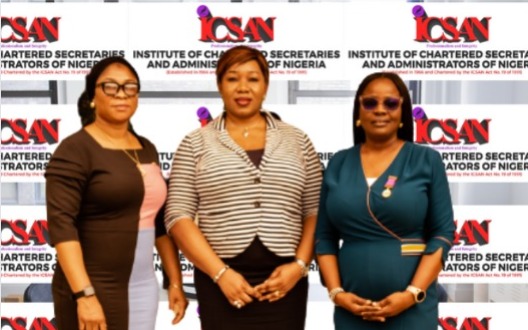 As part of its activities to harp on sustainability and corporate governance in the country, the Institute of Chartered Secretaries and Administrators of Nigeria (ICSAN) will this week Thursday, February 10 holds its Company Secretaries and Registrars’ Forum with the theme: “Sustainability and the Future of Green Economy: A Governance Perspective.

Addressing journalists on Monday, Chairperson of Corporate Members and Training Committee ICSAN, Abiola Laseinde FCIS, said the event which is billed for the Civic Centre in Victoria Island will be chaired by President /Chairman of Council, Institute of Capital Market Registrars, Mr. Seyi Owoturo.

According to her, Mrs. Constance Omawumi Kola-Lawal, Environmental and Social Risk Manager of African Finance Corporation and Mrs. Rukaiya El-Rufai, partner in PwC, will deliver the keynote speeches.

Speaking on the topic, Mrs. Laseinde said it is high time professionals and experts began conversation around green economy and sustainability in order to make Nigeria’s environment more sustainable for its citizenry.

“By identifying the synergies and trade-offs between climate action and broader development needs, policymakers can enhance the positive impacts of recovery packages and lead systemic changes in the green economy for the country.

“But what are the tradeoffs? To inform the decision-making of governments and businesses, they need the evidence. We must use hard data to show how climate action, and shifting to a green economy, will have overwhelming benefits, and not just for the environment, but also in generating more jobs.

Laseinde added that the green economy was an alternative vision for growth and development – one that could generate growth and improve peoples’ lives in ways consistent with sustainable development.

“What would construction of, say, a hydropower plant or solar farm mean? Would it create jobs for skilled urban workers or benefit women working in informal economies? Are the skills, labour and technology to build and run such projects domestically available? What would a transition to 100 percent renewable energy look like for workers?

Also speaking, Chairperson, Publicity, Advocacy Committee of ICSAN, Mrs. Lynda Onefeli said kick-starting a discussion on green economy would be a strategy to overcome ecological crisis, while also making the world a better place to live in.

According to her, due to Nigeria’s great potential of low carbon profits and rich natural assets, a green economy will sustain the nation’s environment because of less dependence on fossil fuel-based technologies.