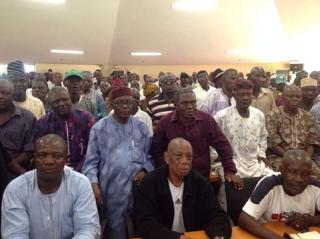 The pensioners made this submission when they took to the street to protest their unpaid pay and blocked the entrance into the government people’s house, Makurdi, Benue State capital.

The pensioners who stormed the streets of Makurdi to demand that government must pay all outstanding arrears due for them, said the situation stated 16 years ago during Akume’s era, saying successful administrations inherited the debt from that regime.

The state Chairman of the NUP who led other members on the protest said that the crisis had inflicted severe agony on the pensioners in the state.

The chairman said “Many of them have died due to abject poverty, neglect and frustration. “There is no gainsaying the fact that pension benefits are the rights of the pensioner and not a privilege. “Pensioners are unfortunately subjected to begging for their rights. “Many of them have died out of abject poverty, neglect and frustration.”

They appealed to the present administration led by Samuel Ortom to do everything possible to protect the interest of pensioners in the state so as to help alleviate the sufferings of the state pensioners.

Meanwhile, it would be recalled in 2012 at a public function that senator George Akume and Gabriel Suswam trade blames over the cumulative pension debt own pensioners in the state.

Mr. Mike Iordye, a former state Head of Service (HOS) who served in both the Akume and Suswam’s administration also testified on oath before a committee constituted at that time disclosed that the state is owing pensioners N8 billion, which he said, was a carry-over from the previous administration in the state led by Senator Akume.

However, Senator Akume insisted that the Suswam administration was getting more funds than those in the past. According to him, he expected Suswam to have done something to reduce the debt, a situation that has led to the over bearing debt profile inherited by the present administration.

Reacting, Governor of Benue state Samuel Ortom who expressed dismay over the situation, said when his administration came on board, in trying to end the pension gratuity arrears own pensioners that has been a problem over the years, he set aside N393 million and 117 million for both state and local government pensioners for the month of may to September only the month October is upstanding.

According to him the effort was to reduced the over bearing pension cumulative debt owned them. He therefore appealed to them to be patience as he is going to discussed their problems with President Buhari on their behalf to make sure their situation is been taking care of.