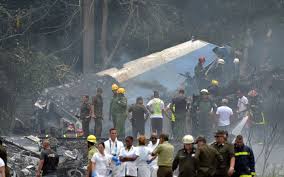 No fewer than 102 persons lost their lives on Friday in a Boeing 737 plane that crashed shortly after taking off from Havana’s main airport in Cuba.

There were at least three possible survivors among the 105 passengers, including five children and nine crew members, Cuban state-run media reported.

According to Reuters, earlier reports on state media said there were 104 passengers.

The number of casualties was not immediately known, but Cuban President Miguel Diaz-Canel, visiting the site of the crash, told Agence France Presse, “it appears there is a high number of victims.”

Debris was all over the area and ambulances and firefighters were at the scene, a Reuters witness said. The fire had been put out, and blackened parts of the fuselage could be seen.

“We heard an explosion and then saw a big cloud of smoke go up,” said Gilberto Menendez, who runs a restaurant near the crash site in the agricultural area of Boyeros, 20km (12 miles) south of Havana.

A worker at Havana’s Calixto Garcia hospital told Reuters three victims of the accident had arrived so far. One had died from burns and other trauma and the other two were in a serious state.

“She is alive but very burnt and swollen,” said a distressed relative of one of the survivors at the hospital.

The flight was destined for Holguin and was leased by airline Cubana from a small Mexican airline called Damojh or Global, Cuban state media said. Cubana declined to comment.