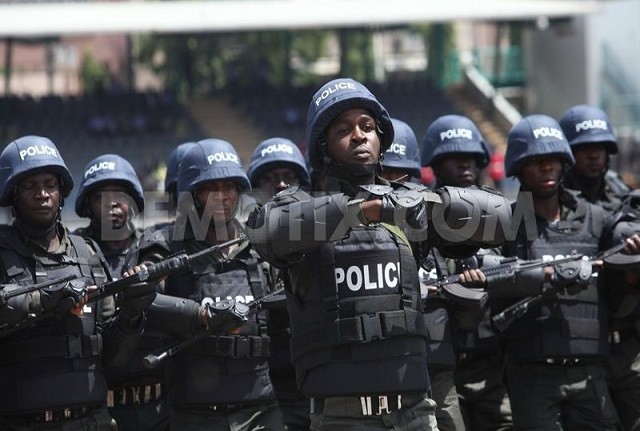 The Nigeria Police has given update on the arrest of suspects in Katsina State involved in kidnapping and armed robbery. Force Public Relations Officer, Acting Deputy Commissioner of Police (DCP), Jimoh Moshood in an update report at the Force Headquarters, Abuja, on Monday, listed the arrested suspects to include:

The Police further indicated that items recovered from them include the following exhibits:

DCP) Jimoh Moshood narrated that on the 12th of August, 2018, the above mention vicious and notorious suspects invaded the house of one Abdulbasir Abubakar Jargaba in Funtua Local Government Area of Katsina State and robbed him of valuables. The suspects further kidnapped the Eight (8) years old Son (Abdulhazeez Abdulbazir Basir) of Alhaji Abdulbasir Abubakar Jargaba to their hideout; held him in their captivity for 11 days and released after collection of ransom.

Moshood added that consequent on the above, the Inspector General of Police directed the IGP Monitoring Unit Strike Force to investigate the matter and bring perpetrators to justice.

National Daily gathered that the operatives of the IGP Special Strike Force on violent crimes working on actionable intelligence, trailed the suspects to their hideout in Birnin Gwari Forest off Sabowa Road, Katsina, Katsina State and arrested the above mentioned vicious and notorious kidnapping/armed robbery suspects after a fierce gun battle between the Police operatives and the criminal syndicate. Five (5) AK47 Rifles, One (1) Locally Made Pump Action Rifle and One Hundred and Five (105) AK47 Ammunition were recovered from their possession.

The suspects were said to have confessed and admitted to their various criminal roles in the commission of the crime. They have also confessed to be responsible for the recent cases of kidnapping and armed robbery in Katsina State and its environs.

How to make plantain Fufu