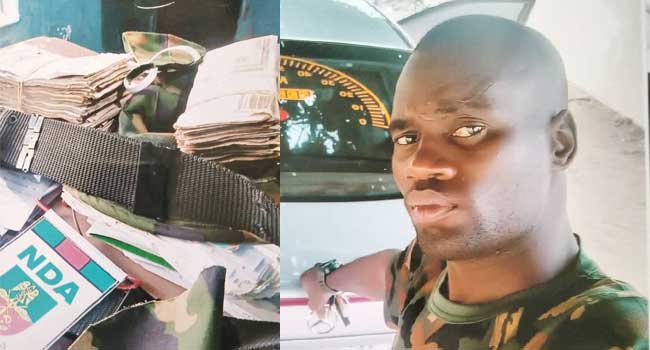 The police in Niger State on Wednesday revealed the arrest of a fake soldier, who was caught in military camouflage with N720,000 cash.

The Police Public Relations Officer of the Niger State Command, Wasiu Abiodun, in a statement on Wednesday, indicated that the fake soldier has been parading himself as a military officer, saying that the police sighted the impostor along the Ibeto environs of Nasko, Magama Local Government Area, Niger State. Abiodun said the police recovered Mercedes Benz with Reg. No. BDG 300 TA, including one NDA emblem, one military camouflage jungle hat, one military vest with a belt, one military face mask, two ropes and three sim cards of different network providers from him.

The PPRO narrated: “On receipt of this information, Police operatives attached to Nasko Division mobilized to the area and arrested one Aliyu Umar, aged 35yrs ‘m’ of  Wawu-Garin Warra, Ngaski LGA of Kebbi State.

“During interrogation, he denied being a military officer, but claimed that the accouterments belong to his brother who is a soldier is serving at Warri.”

The PPRO said the suspect has been on the Command’s watch list. He disclosed that the suspect abandoned a Honda Accord vehicle with Reg. No. RBC 143 FF at Maje along Kotangora road in 2020 to evade arrest for a similar offence.

Wasiu stated that the fake soldier could not give a satisfactory account of himself as he claimed to be a car dealer and farmer, also, saying that the cash in his possession was meant to purchase a vehicle.

The PPRO assured that the suspect will be arraigned in court for prosecution immediately investigation is concluded.