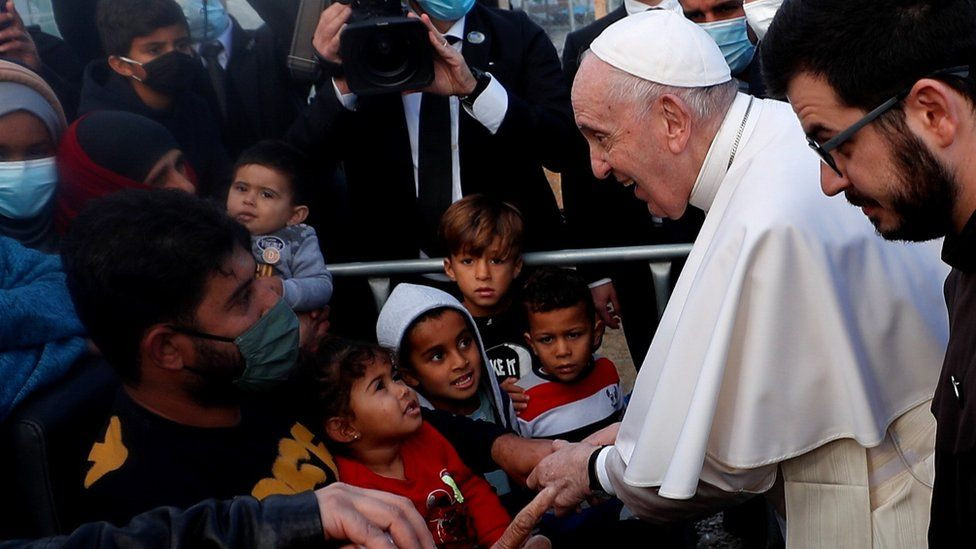 The Pope has condemned the treatment of migrants in Europe.

Speaking on the Greek island of Lesbos, where he met dozens of migrants, Pope Francis said they were being used for political propaganda. He called the neglect of migrants the “shipwreck of civilisation”.

He urged focus on the causes of migration, such as “forgotten wars”, instead of punishing those who feel their effects. He also criticised the building of walls to keep people out.

“In Europe there are those who persist in treating the problem as a matter that does not concern them – this is tragic,” he said.

“History teaches us that narrow self-interest and nationalism lead to disastrous consequences”.

While the coronavirus pandemic had shown that major challenges had to be confronted together and there were some signs of this happening on climate change, there was little sign of such an approach to migration, he said.

“It is easy to influence public opinion by instilling fear of the other,” Pope Francis said.

“The remote causes should be attacked, not the poor people who pay the consequences and are even used for political propaganda.”

The Pope cited war, economic agreements “where the people have to pay” and the flow of weapons as factors leading people to seek a better life elsewhere.

Last month 27 people died when their inflatable dinghy sank in the Channel between France and the UK. Several people have died in freezing temperatures attempting to cross into Poland from Belarus.

And 1,650 people are recorded by the International Organization for Migration as having gone missing while attempting to cross the Mediterranean this year.

Francis said he understood that there was a lot of “fatigue and frustration” over migration that had been exacerbated by the pandemic, but warned that without change there was a risk that civilisation itself would find itself “shipwrecked”.

“Let us eradicate the prevailing mentality revolving around our ego and personal and national egoisms which determine every decision we take,” he said.

The pontiff was speaking at a temporary camp housing about 2,000 asylum-seekers, which replaced the overcrowded Moria camp that was destroyed in fires last year.

Greek President Katerina Sakellaropoulou, who was accompanying Francis, said the migration issue was the responsibility of all Europe, not just Greece.

Greece is building closed camps on several islands to house asylum seekers until their claims are processed. It denies that Greek coast guards push back migrants at sea, insisting that they are saving lives.