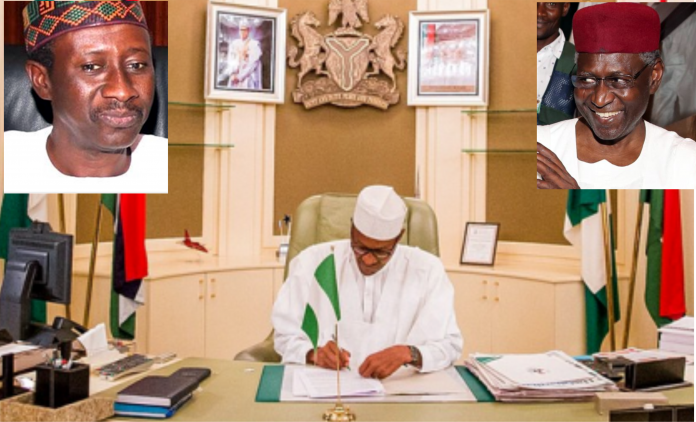 The Presidential Villa, Nigeria’s seat of power, Abuja, has been subtly thrown into turmoil following the covert Cold War between the National Security Adviser, Major-General Babagana Monguno (retired), and the Chief of Staff (COS) to the President, Abba Kyari. National Daily investigation reveals that the Cold War between the two principal officers in the Aso Rock seat of power precipitated the series of revelations and allegations of corruption either against the business interest or any of the principal officers interlocked in the Cold War or their allies.

This was also responsible for the rumour of a coup plot recently revealed by the Niger Delta militants because of the emerging divided loyalty in the Aso Rock.

Our investigation further reveals that the Chief of Staff (COS) is seemingly in alliance with the Director General Department of State Service (DSS), Lawal Musa Daura, while the NSA is in alliance with the Executive Chairman of the Economic and Financial Crimes Commission (EFCC), Ibrahim Magu; both using their allies to fight the battle in the open.

A source from the Presidency revealed that it was that alliance that the COS wants the Department of State Service (DSS) to go after and arrest a member of the Presidential Investigative Committee on Arms Procurement, Air Commodore Umar Muhammed (rtd), penultimate week, accusing him of fraudulent deals involving top government officials.

Muhammed was alleged to be fronting for some high ranking officials within the Economic and Financial Crimes Commission (EFCC) and security agencies to carry out unwholesome activities.

It was indicated that “based on a tip off, DSS operatives raided his residence at No. 4 Lundi Close, off Mississippi Street, Maitama, Abuja, where the DSS operatives,” were said to have, “after a five-hour search, found and seized the sum of $1.5 million in cash and various high-end cars.”

Muhammed, Chairman of EasyJets Nigeria, is one of the 13 members of the Presidential Arms Procurement Investigative Panel set up by President Muhammadu Buhari in August 2015 under the supervision of the Office of the National Security Adviser (NSA).

The Presidential Arms Deal Panel wants to probe Abdulrahman Bello Dambazau, Minister of Interior and former Chief of Army Staff who was allegedly involved in arms deal under late President Umaru Musa Yar’Adua. Presidency sources also disclosed that this move is however being resisted by the Chief of Staff and the D.G of DSS who are said to be working assiduously to block the probe.

Sahara Reporters (an online news medium) which so enmeshed in exposing Dieziani Allison-Madueke, former Minister of Petroleum,  had reported that  the EFCC found the former Petroleum Minister to have done deals with Sahara Energy Field Limited and Atlantic Energy Drilling Concept Nigeria Limited. And the decision by the EFCC to go ahead and charge Atlantic Energy to court is not going well with the COS. The anti-corruption agency is said to be hell-bent on going after Sahara Energy, a move that may expose the big names behind the company.

The Chief of Staff has shown to have soft spot for the two oil firm while the NSA also has interest in Air Commodore Muhammadu who was arrested by the DSS.

Our Presidential source disclosed that the COS and Dambazau want Ibrahim Magu replaced as EFCC Chairman.

Accordingly, there are emerging indications that Abba Kyari, Chief of Staff to President Buhari, along with the Director General of the Department of State Security (DSS) and others has commenced a full-scale war against Magu, EFCC Chairman.

The DSS was said to be angry with the EFCC boss because Magu was held to have stepped on their toes by constantly questioning why they usurped the role of EFCC in carrying out raids into the homes of corrupt former government officials, which is the domain of the EFCC.

The DSS had reportedly raided at least 30 homes of officials and aides of former President Goodluck Jonathan, but only managed to deliver a meagre N47 million and $1.943 million.  “Worse still, some of the monies recovered were never delivered to the federal government treasury and during reconciliation, some of the foreign currencies were found to be fake,” it was revealed.

Sources at the Presidency, according to a report, said there has been a cold war between Magu and members of the President’s kitchen cabinet, who seek to interfere with ongoing corruption cases at the EFCC.

Matters reportedly came to a head recently when SaharaReporters did an exposé that revealed how the Chief of Staff perverted an investigation that the EFCC had commenced against a powerful indigenous oil company, Sahara Energy, which Kyari is directly accusing Magu of being the brain behind the leakage of the story.

Related issues of contention include the planned commencement of the trial of Jide Omokore, a shady businessman, known to have been involved in multi-billion oil deals with former Minister of Petroleum Resources, Diezani Alison-Madueke. It was disclosed that the Chief of Staff had assured Omokore that he would not be prosecuted by the EFCC.

It was also revealed that Magu’s letter of nomination to the Senate for confirmation was delayed by the Chief of Staff and the Attorney General of the Federation because of Magu’s “intransigence.”

Now, the NSA is believed to be going after Sahara Energy. The Sahara group, probably, after weighing the power play in Aso Rock has now switched alliance.

Kyari and D.G. of DSS were in the Buhari’s Campaign caucus.

All these happening in the Presidential Villa were revealed to be giving President Buhari sleepless nights. Two principal officers in the seat of power at war in the midst of his anti-corruption battle, no one wants to shield his sword. There are indications that more revelations will be made in the future.