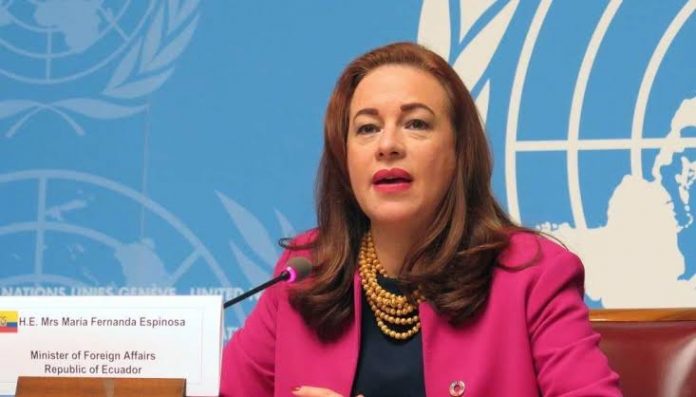 The President of the United Nations General Assembly (PGA), Maria Espinosa, is a guest of President Muhammadu Buhari in Abuja on his one-day official visit to Nigeria on Monday.

Ms Espinosa’s Spokesperson, Monica Gravley, was said to have announced the visit at a media briefing at the UN Headquarters in New York on Friday.

She had explained that the PGA’s visit to Nigeria is part of her eight-day official visit to Central and West Africa sub-regions which began on Friday.

Ms Gravley said cabinet members would join Buhari in receiving the PGA, who would later meet with students of the University of Abuja.

National Daily learned that Ms Espinosa is expected to speak on the role of multilateralism and how to respond to global challenges in a fast-changing world, according to the spokesperson.

Ms Gravley said Espinosa would also meet UN officials in the country and take part in a discussion with women on their role in promoting multilateralism.

It was indicated that the official visit would take the PGA to Chad and Ghana where she would meet with the presidents and top officials of both countries.

“While in Africa, she will grant interviews to national and international media outlets and hold press conferences,” Ms Gravley had said.