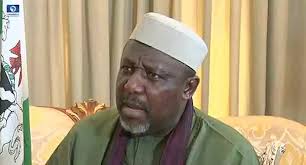 The presidential support committee, south east zone, has given the national working committee of the ruling All Progressives Congress 48 hours to lift the suspension that it served the Imo state governor, Rochas Okorocha.

The committee noted that suspending a key stakeholder and major financier of the party, like Okorocha, did not speak well of the NWC and threatened to embark on legal and mass action if the suspension was not lifted.

The committee said that the whole plan was an orchestrated agenda to deny the Igbo presidency in 2023, knowing that Okorocha is one of the major contenders.

The committee said: “Okorocha’s suspension came to us as a rude shock.

There is no way a cabal can suspend a major financier of the party. ”We give the NWC and the national chairman 48 hours to reverse the suspension without delay else, we will resort to legal and mass action against the leadership of APC.

“The suspension is aimed at disorganising Igbo ahead of 2023. Oshiomhole cannot wake up and suspend a major financier of the party.

We plead with Buhari not to allow some few individuals to rubbish his friends because we know that Okorocha is a good friend of the president.”