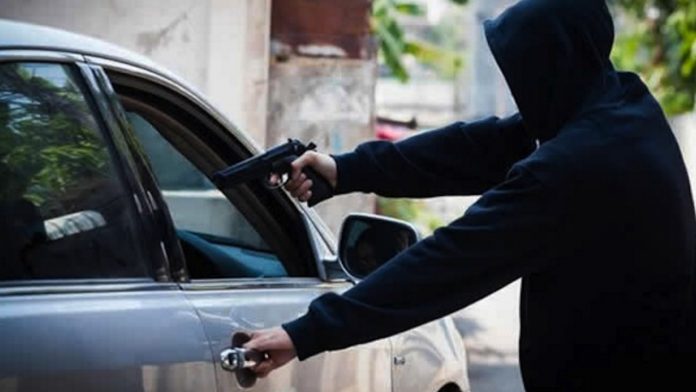 Unseen by most people while in the comfort of their cars, and trapped in suffocating traffic logjams, traffic robbers slowly glide in between vehicles with eyes fixed on unsuspecting victims. And like a Tiger they pounce on their victims dispossessing them of their belongings- phones, handbags and any valuable that is handy, most often in full glares of other motorists.

Welcome to Lagos in 2021, where the regularity of robbery in traffic has practically become the number one enemy of peace and tranquillity, adding significantly to the general fear and apprehension over insecurity.

In the past, these incidents were considered isolated cases and were few and far between, but since the end of the EndSARS protests which forced many security operatives out of the roads, robbery inside traffic has, according to security experts, spiked in some parts of Lagos.

They have different modus operandi, according to Lagosians who had fallen victims to these daring hordes. For instance, some pretend to be hawkers or beggars or cleaning the windscreen of vehicles. They also create artificial gridlock, making potholes on the road or causing distractions as traps for road users.

Most importantly, hoodlums take advantage of the perennial traffic gridlock in Lagos metropolis to rob motorists.

Relating her encounter with these traffic robbers, Mrs. Chinyere said, “Every day, I pray not to find myself in Oshodi, especially at night when there is traffic, because nine out of 10 times, you will be robbed.

“I cannot count how many times I have been robbed in Oshodi, on top of the bridge, under the bridge, at the Cappa side and Arena side. If your car breaks down around there, it is over for you, because you would be robbed; you cannot escape it. Police used to stay on the bridge as you turn to link Agege Motor road before and around Isale/Step side and things were slightly better then.

A lady who simply identified herself as Chioma told National Daily that she was attacked inside an Uber car she took from Lekki to Awoyaya, after Ajah last weekend at around 8pm.

“The driver of the Uber was stabbed but he escaped leaving me trapped inside the car. The hoodlums bounced on me, took my phones, and my handbags containing my ATM. The most saddening part was that they even tried to rape me inside the car, fondling my breast, but I fought back hard.

“They ran into side bushes when a trailer parked beside the road put on its headlamp and honked persistently. Those guys are in their teens,” Chioma added.

Bunmi Aiyegbusi is still shaken and in disbelief, a week after She, along with her friends were attacked and robbed in front of their estate around Dopemu area of Alimosho Local Government in Lagos.

“It was around 7:45pm. We were returning from an event, and were stuck in traffic around Abesan low cost housing estate when a commercial motorcycle parked beside us.

“I thought the passenger wanted to disembark, but to our shock, the two of them got down and showed us a cutlass and a gun, telling us to bring our phones and bags. They took the bag and our phones, jumped on the waiting bike and zoomed off.”

Another victim who shared her experience with National Daily, Abiodun Adeleye, said he had robbed twice in traffic this year, first at Oworonshoki ,  the second time on the Lagos – Abeokuta expressway at Airport Bus stop. Both times I was in traffic.

“The robbers were not even in a hurry; they took their time to rob every car on the road and despite frantic calls to the Police, nobody came to our aid, even though the attack lasted for about an hour.”

Meanwhile a Police Officer in Egbeda area of Lagos who craved anonymity, said they are aware of the rising insecurity, but there was little they could do.

According to him, Police Officers are also afraid of their lives too because they lacked the necessary equipment to tackle the menace.

“We have been victims ourselves. I know of a colleague who was robbed right inside a commercial bus along with other passengers. They were thrown out of a moving bus along Lagos –Abeokuta after being robbed.

“My advice is for people to always be alert when on the road. So many desperate people are out there especially at night and in the early hours of the morning,” he stated.

Reacting to the menace, the Commissioner of Police in Lagos, Hakeem Odumosu stated that over 250 suspects have been nabbed in the  past four months across the state in various hotspots.

He said various strategies had been put in place to check the menace and eradicate traffic robbery across Lagos.