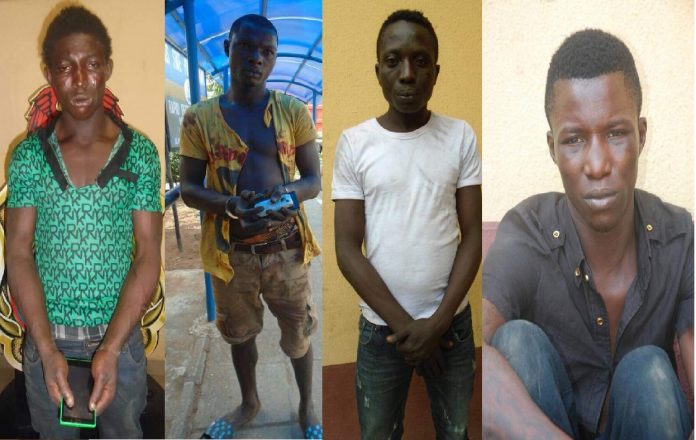 Share this on WhatsApp
Spread the love
By OKOSUN DENNIS
Following complaints by members of the public of attacks while in traffic, about four suspects have been arrested by the Lagos State Police Command while committing the act.

National Daily gathered that Oshodi, Mile 2, Apongbon and CMS and some other isolated areas within Lagos metropolis have been identified as endemic spots.
It was learnt that the traffic robbers in some of these bad spots targeted vehicle occupants, who are busy with their phones while held in traffic gridlock.
“They are mostly attracted to phone lights in vehicles. They monitor the victims well before confronting the vehicle occupants mostly at night,” the police further revealed.
The police also reiterated that the criminals equally target lone occupants of vehicles and other passersby in desolate areas for attacks.
Based reports of several attacks, the Commissioner of Police, CP Imohimi Edgal ordered a renewed clampdown on the traffic robbers in Lagos.
As a result, places like Oshodi, Mile 2 and CMS have had ceaseless arrests of miscreants by Rapid Response Squad (RRS). In addition, they have also created  pin – down points in all these hotspots with a view to mopping up suspected criminals.
Police noted, “The report of incidences of robbery while in traffic is a source of worry to the Lagos State Police Command.
“Some of the major hotspots according to the numbers of complaints so far received through RRS social media platforms (Facebook and Twitter) and SMS to our complaint line (09053950347).
ALSO SEE: Army takes over Zimbabwe, denies coup plot
“More disturbing is that we are in that period of the year when there would be ceaseless movement of people in and around the city.
“While the crime rate in the metropolis has been on tremendous decline in the past few months, robbery in traffic hold-up in some of these affected areas are a source of concern to the acting Commissioner of Police, Mr Imohimi Edgal.”
National Daily further gathered that members of the public have been advised to be conscious and observe the following security tips to avoid further attacks.
“While in traffic, don’t display your personal effects like jewellery, mobile phones, laptops, hand bags; Roll up your side glasses when you need to receive or make phone calls.
They have also been warned not to be “distracted by miscreants pointing at your tyres or banging on the body of your vehicle,” the police warned.
National Daily reports that victims are advised to report the incidents of attacks or notice of suspicious movements by miscreants to the nearest RRS stand point in the area for immediate action.
Share this on WhatsApp