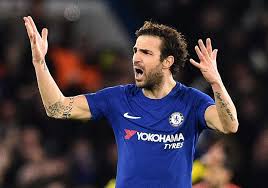 Chelsea midfielder Cesc Fabregas has offered his view on Lionel Messi and Cristiano Ronaldo after their vastly differing starts to this summer’s World Cup.

Fabregas, who failed to make Spain’s squad for the competition, has been working as a television pundit and has also written some pieces for the Telegraph.

The 31-year-old knows Messi well from their time together at Barcelona, and he believes he remains the more complete player, even though Ronaldo is currently bossing it in terms of influencing big games.

The Portugal international has four goals in his first two matches in Russia, and this follows another superb season at club level in which he helped Real Madrid win a third successive Champions League final, and a fourth in five years.

Cristiano Ronaldo is fantastic – but my friend Leo is

the most complete player of all time

While many have long felt Messi is the superior talent, Ronaldo’s incredible hunger and self-belief to take big games by the scruff of the neck seems to be starting to make even the most devout Messi loyalists question who really is the best player.

Fabregas, however, told the Telegraph: ‘Leo became the best goalscorer ever, became the best passer ever, he can score with both feet, his head, he can dribble around four players.

‘He has vision to make assists, he is the most complete ever, no doubt.’