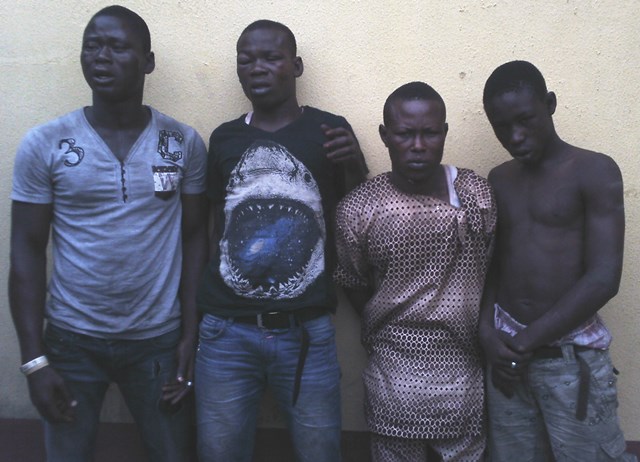 The logistics support to the Rapid Response Squad (RRS) Lagos state Command by the Lagos state government have started yielding tremendous result as operatives of RRS over the weekend arrested an ex–convict and three traffic robbery suspects for allegedly stealing two mobile phones and a wallet from passers-by in Oshodi, Lagos.

The suspects identified as Sodiq Hassan, (17); Lanre Makinde, (20), Ahmed Kazeem, (19), and Sunday Oyeniran, (21), were alleged to have connived with others, now at large to have stolen Tecno i-Pad, i-tel 105 phone and wallets from an unsuspecting members of public.

It was learnt that one of the suspects, Ahmed Kazeem, had snatched an i-tel phone from a victim, identified as Alagbada Jerry, while Sodiq Hassan was reported to have conspired with Awuwa, (at large), to snatch another handset from one Oyebamiji Rasheedat in Oshodi.

On his part, Lanre Makinde, was alleged to have stolen the wallet from one Olamide Lookman, also in Oshodi Under Bridge, while Sunday Oyeniran, an ex–convict, who was released on the 14 November, 2015, was found in company of mobile phone snatched by the gang.

Narrating his ordeal to the Police, Alagbada Jerry, a software analyst, who works at Ikeja said, “I was descending Oshodi pedestrian bridge with my earphone on when suddenly, Ahmed Kazeem brushed his shoulder against mine. I noticed the music I was listening to stopped. I used my hand to feel my phone hitherto kept in my pocket but it was no longer there.

“One of the passers-by who saw him told me Kazeem had stolen my phone, by then he ran away and immediately crossed the expressway. He turned and started looking at me. Unfortunately for him, as we made to chase him, he could not cross the other lane and turned facing our direction and we got him arrested.

“He confessed to have stolen my phone but he told us he has dropped it when he was being chased. He named one Omoga, as leader of those that were arrested. He later collected the phone from where he dropped it” he added.

Another victim, Oyebamiji Rasheedat, explained that her Tecno i-Pad was stolen from her by Sodiq Hassan. I alighted from my husband’s saloon car to open the back door for the passengers they assisted to Oshodi. Unknown to her, Sodiq Hassan and Awuwa had taken her i-Pad placed on the front seat of the car. Unfortunately for them, operatives of the RRS spotted them from afar as they were taking the phone.

“The RRS operatives arrested Sodiq but his colleague, Awuwa escaped with the i-Pad. We made series of efforts to locate Awuwa proved abortive and still with my i-Pad,” she said.

Confessing to the crime, Ahmed Kazeem stated that he picked up the phone when it was falling down, but the phone was with their ring leader, Omoga. He explained that “I was influenced by peer pressure. I have observed the way boys from Idi – Oro operate and snatch phones from passers-by in Oshodi, I decided to demonstrate it.”
It was gathered that Sodiq Hassan, a primary school dropout, said that he was a bus conductor before he was arrested. “I am a generator mechanic in Ibadan and I came to Lagos to raise some money for my graduation. I slept Oshodi Under Bridge.

“Although, we were together that morning, Awuwa was the one who stole the i-Pad. My colleagues and I have searched for him, we couldn’t find him. Awuwa is a very strong guy as none of us can confront him physically. He stays at Idi–Oro, Mushin”, he explained.

Another suspect, Lanre Makinde, narrating what he knew about the robbery said, “I was on drug when the incident happened. I was not conscious of what I was doing. I was desperately looking for money for my graduation”, he explained.

Sunday Oyeniran, the ex-convict pointed out that his involvement with the gang was since his release from the prison on the 14 November, 2015. Naming Eegun and Yoppy as the gang leaders adding that he had severed relationship with the gang when he was in prison. He confirmed knowing them as traffic robbers in Oshodi but stressed that he was never involved in any of the operations.