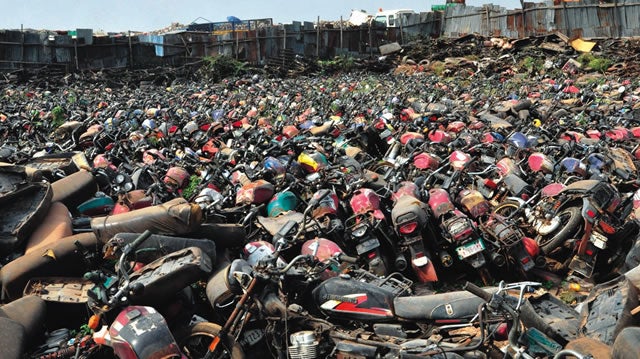 There was commotion in Lagos on Tuesday as Task Force has arrested commercial motorcycles and tricycles before the February 1st take off the government announced on Monday.

Many of the drivers were crying and lamenting as the Task Force Impounded the vehicles.

The ban however kicked off at Alakuko, Alagbado in Ojokoro LGA of Lagos state and arrested about 32 Okada and 18 tricycles on Tuesday. The raid continued in Ikeja and Agege,

A statement by the Commissioner for Information and Strategy, Mr. Gbenga Omotosho, said the government took the decision to ban the operation of Okada and tricycles due to the havoc they cause in those communities.

The statement reads: “After a robust assessment of the debate on what has been widely referred to as the Motorcycle (Okada) and Tricycle (Keke) Menace, the Lagos State Government and the State Security Council have decided that the security and safety of lives of Lagosians are paramount.

The figures are scary.

“From 2016 to 2019, there were over 10,000 accidents recorded at the General Hospitals alone. This number excludes unreported cases and those recorded by other hospitals. The total number of deaths from reported cases is over 600 as at date.

“Therefore, after consultations with stakeholders, the State Security Council, in compliance with the extant Transport Sector Reform Law 2018, has decided to commence enforcement of the law which bans the operation of Motorcycles (Okada) and Tricycles (Keke) in the following Local Governments (LGs) and Local Council Development Areas (LCDAs):

“This is the first stage of the State Government’s plan to sanitize our roads and protect Lagosians from the negative effects of these illegal modes of transportation.

The Law is very clear. Motorcycles (Okada) and Tricycles (Keke) are banned on all highways, bridges and the listed roads.