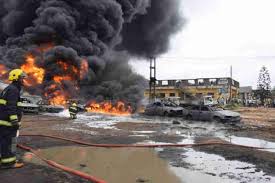 The governor revealed that his administration will provide the needed security and ensure that information gathering along volatile corridors increases.

He also promised to foster stronger synergy with communities in such volatile corridors, “My thoughts and prayers are with the families and businesses affected in the unfortunate incident at Abule Egba.

“We are thankful for the brave members of LASEMA & our fire service that swung into action working all night to reduce the impact. Pipeline Vandals will be shown no mercy.

“We must work together to ensure man-made incidents like Abule Egba are avoided. Security and information gathering along volatile corridors will increase and a stronger synergy with communities must happen. We all have a role to play.”

The National Emergency Management Agency (NEMA) said that two bodies had been recovered from the explosion site.

The raging fire caused panic among the residents of Abule Egba, Ile Epo and Ekoro Road due to the thick smoke which oozed out from the explosion scene.

He, however, said the cause of the explosion is yet to be ascertained, adding that emergency responders immediately swung into action after receiving distress calls from some residents of the area.