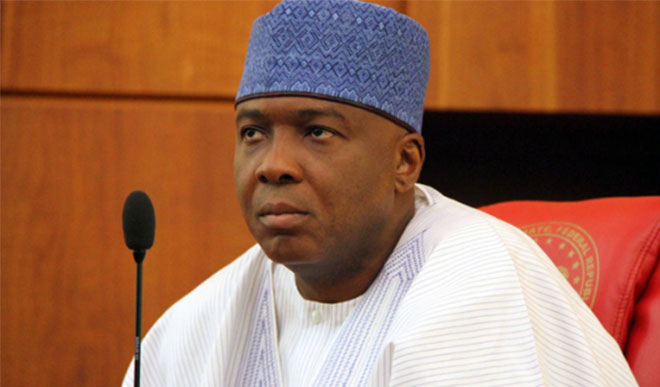 Share this on WhatsApp
Spread the love
As the Senate reconvenes to reconsider the re-submission of Ibrahim Magu, Acting Chairman of the Economic and Financial Crimes Commission (EFCC), for confirmation, one man in the saddle of the controversies over Magu is Dr. Bukola Saraki, President of the Senate. The mix-up over the N388.304 billion Paris Club loan refunds seems to have placed Saraki in a dilemma over Magu’s confirmation by the Senate.
National Daily investigation revealed that stakeholders in the All Progressives Congress (APC) saw an opportunity to raise funds or make money in the handling of the debt refunds through the involvement of consultants. Our investigation established that there was no need for any consultant because the transactions were solely government to international institutions deals. Saraki was gathered to have been consulted by the APC stakeholders on the purpose of using consultants to facilitate the release of the funds.
National Daily discovered that the PAC leaders had planned to use the proceeds made through the consultants to fund elections in Edo, Rivers and Ondo states. APC leaders were gathered to have plotted the shifting of Rivers rerun elections because the money was delayed.
Apparently, when the release of the money was delayed some APC stakeholders raised money through businessmen after consultation with Saraki with the understanding that they will get refund when the money is being released.
The deduction of five per cent from the released fund to service the consultants is currently generating heat in the country. This is particularly so since part of the 5% deduction is being alleged to be used to bribe the Senate to frustrate the confirmation of Magu as EFCC chairman.
More so, when the Senate declined the confirmation of Magu the first President Muhammadu Buhari sent  his name to the National Assembly, the Upper Chamber did not out rightly reject the EFCC boss but had reservations over the security report which purportedly indicted him as represented by the Department of Security Service (DSS). This was the premise that Senator Ali Ndume, former Senate Leader, said that the Senate did not reject Magu’s confirmation as widely reported across the country, but will still consider his confirmation. Even though the Senate did not reject Magu, Ndume did not have the mandate to say in the public that the decision was not a rejection.
Ndume was gathered to have thereafter gone to Magu to tell him that the deductions from the debt refunds was the money governors brought to Saraki to stop his confirmation.
Before the Senate turned down Magu’s confirmation, Saraki met with Buhari to reveal to the President the report they have against Magu and why it will be difficult to confirm him with such indicting report from the DSS. The President had told Saraki that they should make it possible to ensure Magu sale through the process. Thus, President Buhari was in the know of the Senate earlier decision even before it was made.
Now, Saraki is in a fix over Magu’s confirmation as the Senate reconsiders his nomination by the President.
Magu is already fighting the Senate; the EFCC is investigating the 5% deductions targeting senators in the belief that 3% of the money was used to bribe the Senate.
Saraki has gone back to the President to tell him that the confirmation of Magu as EFCC chairman is a difficult thing but the President insists on his confirmation.
Share this on WhatsApp