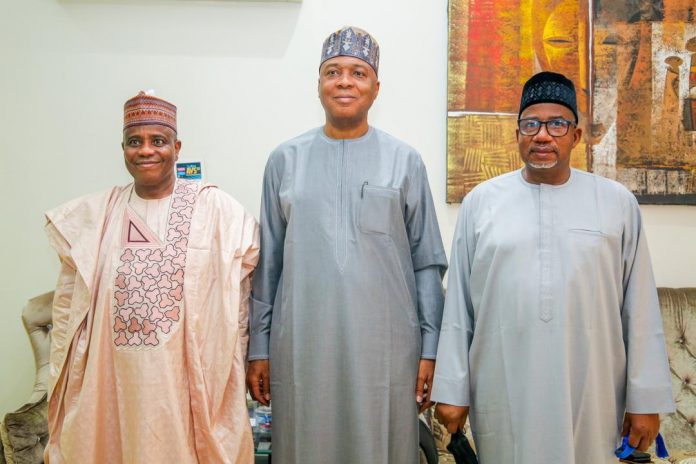 At least four presidential aspirants on the platform of the Peoples Democratic Party say they will accept a consensus arrangement to position the party for victory in 2023.

The aspirants made the disclosure while briefing newsmen on the outcome of their visit to Gov. Okezie Ikpeazu of Abia in his Umuobiakwa country home in Obingwa Local Government Area (LGA) on Tuesday.

Speaking on behalf of other aspirants, the former Senate President, Bukola Saraki, said the decision was informed by their determination to make Nigeria better.

He said that the lives and welfare of Nigerians were more important than the individual ambition of every aspirant.

He said said: “Nigerians are going through hardship and insecurity.

“These are the events that are happening in the country that make some of us to see that we are doing the right thing.

“Let me reassure Nigerians that we are very determined and driven by the determination to make this country work.

“If this is the sacrifice that we will make to turn things around in Nigeria, we want to let Nigerians know that we are willing to make it.”

Saraki said that they were in Abia to seek the governor’s support to ensure that the consensus arrangement would work so that PDP would win the general elections.

He further said that Ikpeazu’s encouraging words had inspired and further motivated them to move forward.

Saraki said that this was the first time aspirants would come together on their own to adopt a consensus arrangement.

He said that although the initiative was a tough challenge, they were convinced it would make Nigeria work.

“We are heading for Enugu to see the governor of the state and by the time we have visited Enugu we would have completed the tour of the 19 PDP states and the governors have shown their support,” he said.

Responding, Ikpeazu expressed delight over the development, saying that it had rekindled his hope in the emergence of a new Nigeria.

He described the consensus arrangement as “a commendable and altruistic initiative”.
He said it was borne out of the desire to forge an alliance to transform the nation.

“I want to say that you have my commitment and cooperation to move on and I will do my bit to ensure that all of us come together.

“The survival of our country, interest of the poor masses of the country should come before whatever personal agenda we have.

“I am happy that Nigeria has patriots and leaders, who are capable of putting Nigeria first,” the governor said.

He promised to support efforts aimed at uniting the party and helping it to present a common front during the upcoming elections.