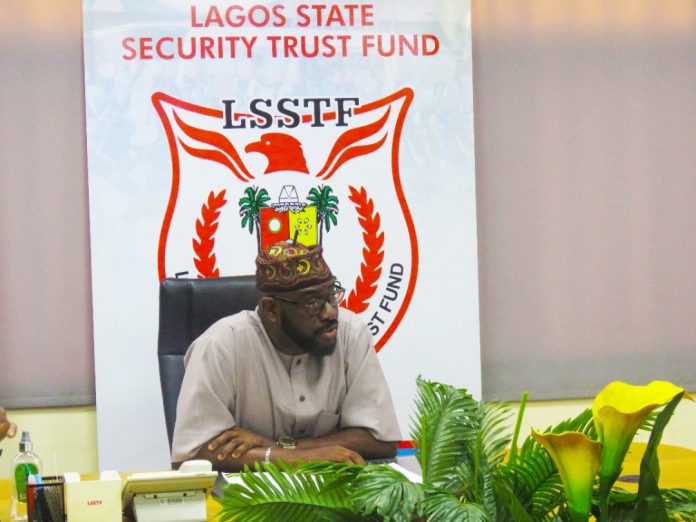 Share this on WhatsApp
Spread the love
The Executive Secretary of the Lagos State Security Trustfund (LSSTF), Hon. Razak Balogun has harped on the need for all Lagosians to be much aware that ensuring maximum security in the state is a collective responsibility.
Hon. Balogun made the declaration while hosting a delegation of the Lagos State House of Assembly Correspondents Association  (LAHACA) in his office.
In his words, “we pledge to continue to help Lagosians by supporting them to ensure that we have a very robust security network in the state.
“It is only in this part of the world, where when a police officer asks to use your office toilet you will say he cannot enter your office, we must try as much as possible to inculcate good habit of trying to assist our security agencies because without them we all will not be safe in this society.
“I also call on corporations and individuals to continue to donate to this trustfund without the donations we get, there is nothing we can absolutely do to secure the state.”
He also to used the opportunity to  also plead with Lagosians, to also see the various security assets of the state as their’s and to also assist the security agencies.
He added that but for existence of the LSSTF, it would have been pretty difficult to secure the state.
“After the end of my first five year  tenure, Governor Sanwo-Olu also renew my tenure again, so it tells you that at least there is a lot of confidence reposed in one and one is carrying on that mandate and without this organisation I don’t know how the security of Lagos would be.”
Commenting on the agitations for state police, Balogun stressed that it is long overdue, citing models of well developed climes where even the position of Inspector General of police is elective rather than selective and that it gives the individual much Independence required to do the job effectively.
“In some places of the world the office of the Inspector General of Police are even elected, you run for that office and you have your term of office so you are secured.
“I think the issue of state Police or whatever nomenclature given to it for me is long over due, I just  told you about our state that in 2005 or thereabout we unbundled the health sector because it was too over centralized.
“ You need a needle you have write from Epe to Alausa how can a system run that way? So if we can do that in 2005 in Lagos, how do you now explain a federal police for population of about 200 million people?
“Maybe it was working when we were 50 million people or 30 million or maybe nine, ten or twelve states or whatever or three regions. Now you have 36 states plus one and over 200 million people and you still think you have to get all these things from Abuja, obviously it’s not working.
“It is a known fact that without Lagos State government our police organisations in Lagos State cannot function.
“The records are there and so if we can do all that, we can create our Lagos state Neighbourhood Safety Corps and we are making progress, you see our folks in their uniforms well kitted, you admire them and so why can’t we have a state police and if you say, what is so difficult about having such reformation?
“ All you need to do is put good legislation in place and know that nobody is going to override people.” Balogun reiterated.
Share this on WhatsApp