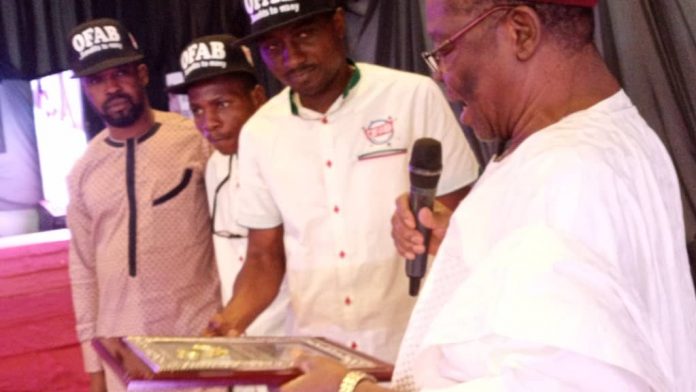 Senator Jonathan Silas Zwingina, has charged well meaning Nigerians to concentrate on a deliberate move to reduce the inequality index in the country, through social intervention at the grassroots level.

Zwingina made this assertion while presenting TheNigerian News Star award for Image Promotion to (Olawuyi  Folarin Alao Beneficient)OFAB Foundation at NAF event centre in Abuja.
The elder statesman,Senator Zwingina who represented the Chairman of the day,Senator Ken Nnamani at the third anniversary of the TheNigerian News, urge the OFAB initiator,Mr Folarin Alao to keep up the good works of empowerment and enhancement of ordinary Nigerians as well as projecting the image of the country positively in Diaspora.
According to him the award is in recognition of OFAB’s role in enhancing Nigeria’s image abroad through effective partnership with individuals,groups,agencies,organisations as well as government at the grassroots.
To implement activities benefitting the community at large.
“I like to give you this award on behalf of the organizers and to encourage you to do more,we are proud of what you are doing and this plaque is to encourage you not to relax but to make you do more.” Zwingina said.
OFAB received ‘The Most Outstanding PAN African Group in the Diaspora Award’ at the epoch making event,the highlight of which accommodated the official presentation of a book written in honour of President Mohammadu Buhari’s untainted integrity. 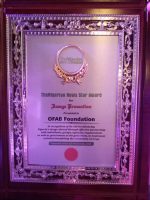 The book Integrity versus Power play, Understanding the Buhari Phenomenon a book presentation by Mr.Phillip Agbese Esquire was reviewed by Professor Udenta O Udenta,who dispassionately critique the piece urging President Buhari to take decisive actions geared towards unifying the country more.
In Udenta’s view people’s consciousness need be reworked,inter party relationships need be reconciled, stakeholders should be carried along through organization of town hall meetings to elicit feedback for good governance.
Divisive tendencies should be eschewed to tackle the visible animosity in our body polity.
Mr.Olawuyi Folarin Alao founder of OFAB foundation a non government organisation, largely scored double honours reckoned both locally and national in Nigeria, having being recipient of three awards within few weeks.
He also got recognition locally from the Ibarapa online Radio and TV which dubbed him the ‘Philanthropist of the year 2019’ also in Eruwa he got ‘Adviser to Ambition club of Eruwa’ amongst others.
Share this on WhatsApp