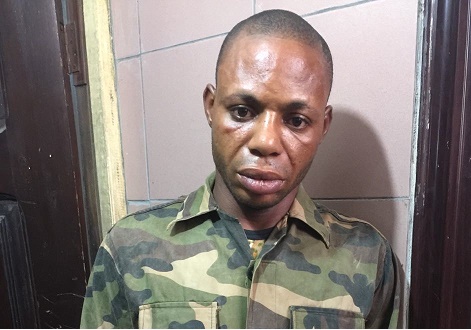 A suspected fake soldier is cooling off in Police custody for allegedly stealing motorcycles, popularly known as okada across the states in Nigeria.

The suspect, Benjamin Okon, who has been parading himself as a military personnel, was arrested by the Men of Special Anti-Robbery Squad (SARS) of the Lagos State Police Command who acted on a tip-off from members of the public.

It was learnt that the policemen swooped into action upon receiving the information, which eventually led to the arrest of the suspect in the wee hours of Sunday, January 1, 2017.

“The suspect was fond of intimidating members of the public under the pretense that he is a Military personnel. His hostile attitude made people not to associate with him, however, when we suspected his moves, we summoned courage to report to the police”, the source revealed.

The suspect, who made a confessional statement during investigation at the police Command, said that he had an accomplice (name withheld) who received the stolen items from him.

He revealed that he usually goes to neighbouring states to snatch motorcycles, and his receiver, helped him to sell them to prospective buyers.

“I am an expert at snatching motorcycles from unsuspecting members of the public. I had stolen countless of Okada, which my accomplice had helped me to sell. I do travel far and wide across the country to perpetrate this crime.

I robbed and sold looted items to him, and he subsequently sells them to some other persons. Once I bring the bikes to him, he will pay me off and I will move on to steal another one”, the suspect revealed.

In her reaction, the State Police Public Relations Officer, (PPRO) Superintendent of Police, Dolapo Badmus, who confirmed the incident, said that the suspect would be charged to court upon completion of investigation.

She noted that efforts are in top gear to apprehend the receivers and others who have connection with the crime.