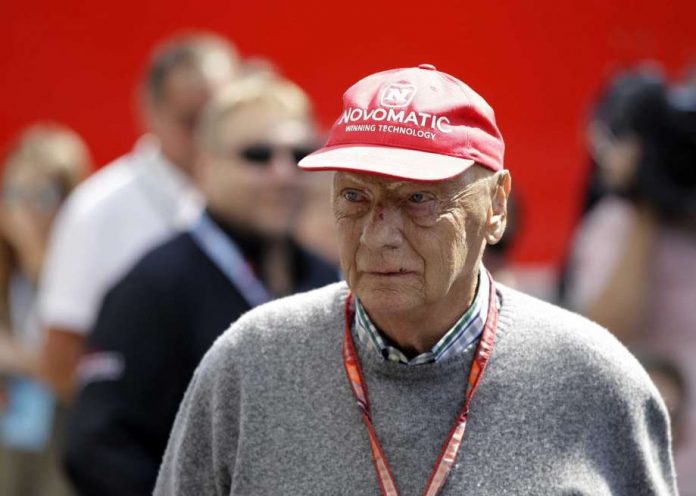 Legendary Formula One driver Niki Lauda has died at the age of 70, his family said on Tuesday, triggering an outpouring of praise for a man whose track victories and comeback from a horrific crash enthralled race fans worldwide.

Lauda died at the University Hospital Zurich in Switzerland on Monday night surrounded by his closest family members, a spokesperson told AFP.

His death comes eight months after he underwent a lung transplant. An Austrian news report said Lauda — who also had kidney transplants — was hospitalised for a dialysis earlier this month in Switzerland.

Walter Klepetko, who performed the lung transplant at Vienna’s general hospital last year, said there was no specific cause of death.

“It was a long process, and the patient reached its end. Niki Lauda fought. He was a great man. But it has been clear for some time that we cannot bring him back to the ‘race track’”, he was quoted by the Austrian news agency APA as saying.

The family said in a statement that Lauda died peacefully, highlighting his “unique achievements as an athlete and entrepreneur… his tireless zest for action, his straightforwardness and his courage.

“A role model and a benchmark for all of us, he was a loving and caring husband, father and grandfather away from the public, and he will be missed.”

Lauda won the Formula One drivers’ world championship three times, in 1975 and 1977 for Ferrari and in 1984 with McLaren, despite a terrible race crash in 1976.

“Everyone at Ferrari is deeply saddened at the news of the death of our dear friend Niki Lauda,” Ferrari said on its Twitter account as social media exploded with the news of his death.

“Niki will forever be in our hearts and enshrined in our history. #RIPNiki,” his former team McLaren tweeted on their account.

Lauda had been non-executive chairman at Mercedes F1 since 2012 and he was instrumental in bringing in British driver Lewis Hamilton to spark a run of success that has brought five consecutive world drivers’ and constructors’ championships.

Mercedes team principal Toto Wolff said Lauda was “irreplaceable” and that the team had lost “a guiding light”.

“Forever carried in our hearts, forever immortalised in our history. The motorsport community today mourns the devastating loss of a true legend,” Formula 1 said on Twitter.

Lauda was born as Andreas Nikolaus on February 22, 1949, in Vienna into an upper middle-class family, who did not share his passion for cars.

In 1968, without telling his parents, Lauda won his first race with a Mini Racer he had bought with his grandmother’s help.

During his driving career, Lauda suffered horrific injuries on August 1, 1976 when, having already won five races that season, his vehicle burst into flames on the Nuerburgring in Germany.

He had severe burns to his face and hands, and inhaled toxic fumes which damaged his lungs.

Despite being given the last rites in hospital he made an almost miraculous recovery to race again just six weeks later still bandaged and in intense pain.

He missed only two races that season but was unable to hold off the challenge of Britain’s James Hunt, who went on to claim his only world title.

The rivalry between the two men — which demonstrated the Austrian’s extraordinary courage and fighting spirit — was portrayed in the 2013 film “Rush” by American director Ron Howard.

The next season, in 1977, Lauda went on to win his second Formula One world championship with Ferrari.

Former F1 driver Johnny Herbert, describing Lauda as “courageous, chatty, and extremely funny”, added on Twitter: “I am going to miss you being around the @F1 paddock but the legend of Niki Lauda will live on, because you were a very very special man.”

– One of Austria’s greatest –

“With Niki Lauda, Austria loses one of its greatest personalities… He is a role model for courage, discipline and directness,” he said.

Lauda quit Formula One at the end of 1979 to pursue his second passion, civil aviation.

But he came back to the race circuit in 1982, this time with McLaren, and won his last world championship with them in 1984.

Off the racetrack, Lauda — recognised by his trademark red cap hiding scars from his 1976 accident — founded and then sold several airlines with a majority stake of his latest going to Ryanair in 2018.

Tragedy hit in 1991 when a Boeing 767 of his Lauda Air fleet crashed in Thailand on its way from Bangkok to Vienna, killing all 223 people aboard.

In 2008, Lauda married Birgit Wetzinger, a former flight attendant, who had donated a kidney after one of his transplants failed.

Besides their twins, a boy and a girl born in 2009, Lauda also had three other sons from previous relationships.